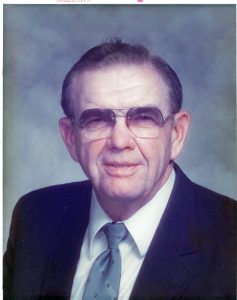 Moris Webster, 90, St. Vincent, Minn., passed away at Altru Hospital in Grand Forks on Sunday, Nov. 25, 2018.
Moris W. Webster was born April 4, 1928, in Hallock, Minn., to William and Clara Webster. Brother Rodney joined the family in 1931 and sister, Virginia in 1935. The family resided on a farm at St. Vincent. Moris and his brother learned to farm at a young age and farming stayed in Moris’ blood throughout his life. He attended elementary school in the Humboldt area and then went to the Northwest School of Agriculture in Crookston for high school, graduating in 1945. He was a member of the swim team and was nicknamed “Speed” because of his speed in the water. Moris continued to farm following graduation.
On Dec. 18, 1948, Moris married Diana Ziesman from Morris, Manitoba. They lived on a couple different farms in St. Vincent before eventually moving to the family farm. They had three children, June, Keith and Dale. Moris and his brother operated a truck line for several years besides farming. Moris became the chief mechanic on the farm. Grain crops, soybeans and sugar beets were raised. Moris loved to go fishing and taught his children how to fish.
In later years, Moris and Diana would winter in Mesa, Arizona. Moris learned to dance during those years and always looked forward to going to dances and listening to western music.
Moris served on the board for Joe River Cemetery until his death. He was very active in the North Star Church in rural St. Vincent and served in various positions until the church closed. He served as an usher for many years at Pembina Evangelical Free Church. Church and faith in Christ was a top priority in his life. Moris was involved on committees with the Kittson County Extension Office as well.
Moris is survived by his wife, Diana; a daughter, June (Dwight) Anderson of Kindred, N.D.; sons, Keith, Tok, Alaska and Dale (Judy), St. Vincent; a sister, Virginia (Barry) Duhachek; grandchildren, Barry, Ken, Della, Lisa, Hailey and Noah; nine great-grandchildren, two great-great-grandchildren; and several extended family members.
He was preceded in death by his parents; brother, Rodney; an infant child; and a grandson, Jeremy Anderson.
Memorial services were held Saturday, Dec. 1, 2018, at 2 p.m. in the Evangelical Free Church in Pembina, N.D. Visitation was held for one hour prior to the service. Interment will be in the Joe River Cemetery. Rev. Mason Peters, presiding; Karin Ohmann, pianist; LeAnn Gatheridge, soloist. Honorary pall brearers were Jimmy Morris, Marshal Hemmes, Dave Hemmes, Matt Kuznia, Mark Prosser, Ron Ohmann and Gary Webster.
Austin Funeral Chapel, Hallock, was in charge of the arrangements. www. austinfuneralchapel.com.