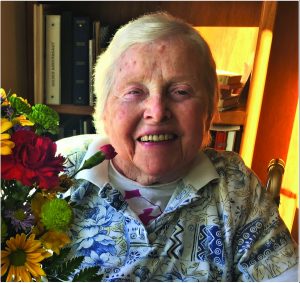 Jeanne Theodora (Lundberg) Backstrom, age 98, died Nov. 24, 2018 in Northfield, Minn.
Jeanne was born during a snowstorm on Jan. 12, 1920 in the family farmhouse near Kennedy, Minn. The doctor and liveryman were able to get the horse and sleigh out of the ditch, but arrived after the birth. She was the sixth of nine children and enjoyed telling warm, loving tales about her Swedish immigrant family. She also never lost her love for the flat land and immense skies of the Red River Valley. (And the cows!)
As a young adult she worked as a nursemaid, attended Lutheran Bible Institute, and worked at a Bible bookstore.
On May 28, 1947, she and Norman Backstrom were wed the day after they both graduated from the Missionary Health Institute in Toronto, Ontario.
They lived in the Minneapolis area from then on, raising six children and staying richly involved with many people. Love for God and for their family, friends, and neighbors was a hallmark of their lives.
The very most important relationship in Jeanne’s life was with Jesus Christ. We are confident of her eternal destiny, not because of her many merits but wholly based on His – and her acceptance of Him as not just her Savior but also her Lord.
She is survived by her children: Karen (Laren) Winter, James (Merry Carole) Backstrom, Mary (George) Studor, Elizabeth (Daniel) Van Loon, Peter (Michelle) Backstrom, and Brian (Tina) Backstrom; 18 grandchildren; 22 great-grandchildren; brother, Roger Lundberg; sisters-in-law, Beverly Lundberg and Margaret Backstrom, and many beloved nephews and nieces and other extended family members.
She was preceded in death by her husband Norman; parents, Gottfred and Betsy Lundberg; seven sisters and brothers: Vivian, Mae, Violet, Garwin, Doreen, Ruth and David.
Funeral services were held on Saturday, Dec. 1, 2018 at 11 a.m., Grace Free Lutheran Church, Maple Grove, Minn. Interment was in Fort Snelling National Cemetery. Visitation was held Friday, Nov. 30, 4-6  p.m. at Gill Brothers Funeral Homel and also one hour prior to service at church.
If so desired, memorials may be directed to AFLC Missions.
Gill Brothers Funeral Home was in charge of the arragnements. www.gillbrothers.com.