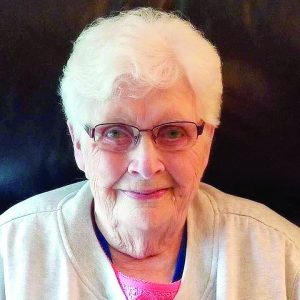 Elizabeth (Betty) Anna Leibnitz, 92, passed away, surrounded by family in her home in Chanhassen, Minn., on Wednesday Dec. 19, 2018.
Betty was born on Jan. 11, 1926, to John and Theresa Baustian in Hardwick, Minn. Her family farmed in both North Dakota and Minnesota, eventually settling in Lengby, Minn. Betty attended and graduated high school in Fosston Minn., then began her career in banking. Betty was married to Harold Mickelson in November of 1946 and had two children, Allen and Karen.
In September of 1956, Betty married Lloyd Leibnitz and the two moved to Hallock, Minn., where they made their home. Betty and Lloyd had three children, William, Robert, and Marilyn.
In 2006, Betty moved to Summerwood Presbyterian Home in Chanhassen, Minn., to be closer to family where she resided until her death.
Betty worked hard and took pride in her banking career. She retired from Northwestern State Bank in Hallock after 20 years. Betty was a busy and devoted mother, grandmother and friend.
In 1973, she was part of the team that won the Minnesota State curling championship. She enjoyed traveling and seeing new places. She was an active volunteer at church and in the community. Betty hand stitched many quilts for Grace Lutheran Church missions and was a lifelong member of the American Legion Auxiliary.
When Betty moved to Summerwood, she enrolled in a ceramics class and discovered her love for clay sculpting. Betty made many beautiful pieces of pottery which she proudly shared with her family and friends.
Betty is survived by her children, Allen (Ruth) Blaine, Minn.; Karen (John) Atlanta, Ga.; William (Sue) Prior Lake, Minn.; Robert (Patty) Rock Springs, Wyo. and Marilyn, Chaska; grandchildren: Troy, Melissa, Mallory, Britney, Brianna, and Erik; great-grandchildren Paige and Morgan; a brother, John, Nebraska; and many nieces and nephews.
Betty is preceded in death by her husband Lloyd; mother and father, John and Theresa; sisters, Evelyn and Mary; and brothers, Edward and Leo.
A memorial service for Betty will be held at Huber Funeral Home in Eden Prairie, Minn., on Jan. 11, 2019, at 11 a.m. There will be a visitation one hour prior to the service and a luncheon served after. All are welcome to attend.
Huber Funeral & Cremation Service, Excelsior Chapel, is in charge of the arrangements.www.huberfunerals.com.