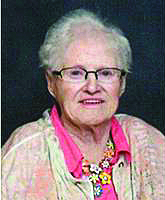 Joan M. Phillips, 85, of Moorhead, Minn., died on Saturday, Dec. 22, 2018, in Eventide on 8th in Moorhead.
Joan was born May 30, 1933, in Scobey, Mont., to Ole and Agnes (Lee) Anderson. After the early death of both parents, she was raised by her grandmother, Kaia Anderson in Hallock, Minn.
On Nov. 26, 1950, she married Harold Phillips, where together they made their home and started a family. Joan kept busy with raising eight kids and working at the Kittson County Hospital until retiring in 1997 after 35 years.
Over the years, Joan enjoyed spending time at their lake place on Lake of the Woods, and spending the winter months in Pharr, Texas. She also enjoyed reading and listening to her collection of music of all kinds. Never could she pass a flea market or rummage sale without stopping to find her next treasure. She will be dearly missed.
Joan is survived by her sons, Keith (Julie) Phillips of Moorhead, David Phillips of Shakopee, Minn., Robert (Christine) Phillips of Texas, Kevin Phillips of Roseau, Minn., and Jon Phillips of Thief River Falls, Minn.; daughters, Marlene Rodriguez of Grand Forks, N.D., Karen (Doug) Henrickson of Strandquist, Minn.; half-brother, Jimmy Anderson; 27 grandchildren and 30 great-grandchildren.
She was preceded in death by her husband, Harold; parents, Ole and Agnes; son, Dale Phillips; daughter, Kristi Westman; granddaughter, Tiffany Phillips; great-granddaughter, Kaia Powell; and half-brother Curtis Anderson.
Visitation was Saturday, Dec. 29, from 11 a.m. – 12 p.m., in Bethesda Lutheran Church, Moorhead.
Funeral was Saturday, Dec. 29, at 12 p.m., in Bethesda Lutheran Church, Moorhead.
Online guestbook at www.wrightfuneral.com