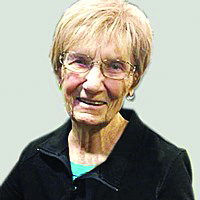 Rose Younggren, 88, passed away peacefully at Kittson Memorial Healthcare Center in Hallock on Monday, Dec. 24, 2018, with her family by her side.
Rose was born to Alex and Lena (Krishka) Layhon in Pembina, N.D., on Nov. 1, 1930. She attended and graduated from the Pembina school. After graduating, Rose moved to Hallock to work and it was there that she met the love of her life, Larry Younggren.
Larry and Rose were united in marriage on June 27, 1954, at the Northcote, Minn., Presbyterian Church. They lived in Northcote for 10 years before moving to a farm in Hill Township. In 1973, Larry and Rose moved into Hallock.
Rose was a dedicated farm wife and loved cooking meals that were often brought to the fields during the busy planting and harvesting time. She and her sister-in-law, Jan Younggren, cooked a huge noon meal during beet harvest every year up until last year for all the drivers and field workers that helped on the farm.
Rose was active in her church and community. She was an avid curler and golfer, which she enjoyed doing for many years with Larry. Larry and Rose enjoyed many years of golfing in Florida during the winters. She was a dedicated member of both the Two River Golf Club and the Hallock Curling Club. She volunteered every chance she could in order to promote these organizations and ensure their success. Rose and Larry curled together in many bonspiels in clubs all around the area. Rose had the privilege of curling competitively at the National Women’s Playdowns in Seattle, Wash., with Eileen Swanson, Lonnie Kriel and Janet Daugherty. Their team finished second in the nation and was one of the biggest thrills of her life.
Rose lived for spending time with family and friends. Whether it was a holiday gathering or a birthday, it was important to gather everyone together around the table to celebrate. Her daily trip uptown for coffee with her sister, Helen, was the highlight of each day. Playing bingo with friends at the Eagles, in Fargo with her grandchildren or the “pro-circuit” bingo in the Cities with Helen and Margaret, was a favorite past time.
Although Rose had many community and social interests, her passion was her yard and her flower beds. She spent every day from spring thaw to fall freeze, grooming her yard and tending her flowers. There was no better way to spend a day than digging in the dirt of her beautiful flower beds.
Rose is survived by her daughter, Diane Younggren; two sons, Dan (Diane) Younggren and Darryl Younggren, all of Hallock; four grandchildren, Corey (Amanda) Younggren of Hallock, Kailey Younggren of Fargo/Moorhead, Connor Younggren of Fergus Falls, and Blair Younggren of Hallock; one great-grandson, Lawrence James, who was the apple of her eye and the light of her life in the past 10 months. She is also survived by sisters, Catherine (Ernie) Klegstad and Helen (Tom) Weleske both of Hallock, Margaret Mattson, Mounds View, Minn., Doris (Ray) Heiser, Verona, N.D., Annie (Frank) Bergh, Clearbrook, Minn., Mary Bordeniuk,  Cavalier, N.D.; a sister-in-law, Janice Younggren of Hallock; and many nieces and nephews.
She was preceded in death by her loving husband, Larry; her parents; brothers, Mike Layhon, Alex Layhon and John Layhon; sisters, Sophie Zaharia and Barbara Hagen; sisters-in-law, Margaret Layhon, Belle Layhon, Vera Layhon and Marlyce Peterson; brothers-in-law, Harley Younggren, Philip Peterson, John Bordeniuk and Mike Zaharia.
Funeral services were held Saturday, Dec. 29, 2018, at 11 a.m. in the First Presbyterian Church at Hallock. Interment will be in Greenwood Cemetery, Hallock. Rev. Marge Landwehr, presiding; Renee Wahl, organist, Erik Finney, soloist and the Sanctuary Singers. Honorary casket bearers were Corey and Amanda Younggren, Kailey Younggren, Connor Young-gren, Blair Younggren and Lawrence James Young-gren. Casket bearers were Tom Klegstad, Shane Weleske, Erik Younggren, Bruce Younggren, Tom Swanson and Jim Syvertsen Jr. Visitation was held at the church on Friday evening from 6 to 8 p.m. with a prayer service at 7 p.m.
Austin Funeral Chapel, Hallock, was in charge of the arrangements. www. austinfuneralchapel.com.