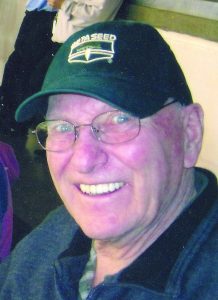 Jerry Henry Lindegard, 92, of Hallock, Minn., passed away peacefully with family at his side at the Kittson Memorial Nursing Home on Saturday, Dec. 29, 2018.
Jerry was born on July 9, 1926, in Hallock, to Henry and Frances (Jackson) Lindegard. He attended school and grew to manhood there, graduating in 1944. Jerry served his country in the U.S. Navy, enlisting in 1944 and was honorably discharged in 1946. He attended the University of Minnesota from 1946 to 1949, during which time he played hockey for the Gophers and was a captain on the team from 1947-49. He played for the Rochester Mustangs hockey team during their 1949-50 season. He loved hockey and played most of his life. Jerry was invited to play in Europe with the 1948 U.S. Olympic team, but he declined, stating that his classes and teammates were more important.
After returning to Hallock, he began his farming career on the Ole Paulson farm west of Hallock along the Red River, eventually purchasing the farm. He was united in marriage to Lois (Younggren) on Dec. 6, 1951, at the Northcote Presbyterian Church. To this union, four sons were born.
Besides hockey, Jerry’s passion was farming and taking care of his cattle. Jerry was a quiet and humble man, who taught his sons about hard work and being stewards of the land. When time allowed, he enjoyed going fishing with his sons, friends and relatives on trips into Canada, which resulted in many great stories. Although he never officially retired, Jerry and Lois began wintering in Texas and Florida. April would find him back at the farm hard at work, often the first one to show up. He did take some time away from the farm to play tennis, which quickly became his favorite pastime. He continued to enjoy it up until he suffered a stroke in March 2000. Lois cared for Jerry at home until November 2013, at which time he entered the Kittson Memorial Nursing Home. He thoroughly enjoyed visiting with others while there.
He is survived by his wife of 67 years, Lois; sons Richard (Dawn), Robert (Nola), David (Julie), and Joel (Lisa), all of Hallock; 14 grandchildren, Erik, Jocelyn, Joelle, Casey, Dawn, Joni, Scott, Craig, Michael, Janna, Leanna, Kary, Nick and Anders; and 16 great-grandchildren, Marcus, Hayley, Jennings, Ashten, Marki, Evelyn, Vivian, Myla, Alex, Isaac, Chloe, Summer, Cameron, Addison, Ceres and Camden.
Jerry was preceded in death by his parents; sisters, Janet Veldhuizen and Mary Ann Petersburg; brothers-in-law, Duane Veldhuizen and Robert Petersburg; daughter-in-law, Andrea; and great granddaughter, Jane Hauert.
We, Jerry’s family, would like to thank the caregivers and staff at Kittson Memorial Nursing Home for being his “second family” and for loving him as much as we did.
A celebration of his life was held on Saturday, Jan. 5, 2019, at 11 a.m. at the First Presbyterian Church in Hallock. Visitation was Friday at the church from 6 to 8 p.m. with a prayer service at 7 p.m. Reverend Marge Landwehr, presided; the Sanctuary Singers, Diane Younggren, organist, provided special music. Honorary pallbearers were Jerry’s grandchildren.
Austin Funeral Chapel, Hallock, was in charge of the arrangements. www. austinfuneralchapel.com