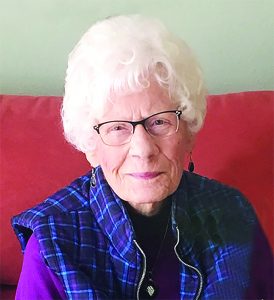 Altha Winnifred Carlson of Hallock, Minn., died at the assisted living apartments in Hallock on Jan. 9, 2019.
She was born on Oct. 6, 1926, the daughter of George and Winnifred (Holdstock) Westerberg.  Altha grew up on the family farm by Lake Bronson and graduated from Lake Bronson High School in 1944.
On July 12, 1947, she married Ellwood Carlson.  The couple then moved to Thompson Township near Hallock where they farmed.  Altha worked at Hallock Farmers Mutual for many years until she retired in 1990.
Known as Mother to many, Altha will be most remembered for her creativity as a seamstress and avid quilter.  She had enormous flower gardens on the farm each summer. She rarely bought a loaf of bread, preferring instead to make her own. She was an architect of elaborate gingerbread houses each Christmas, making them for her grandchildren and family friends. Ellwood affectionately called her the best-dressed woman in Hallock.  Even in her later years, she still wanted to look nice every day. Recently she commented she just didn’t feel dressed until she put on her earrings.
After 55 years of marriage Ellwood passed away in 2002, and in 2005 she moved into town. Ironically, she moved into the house her mother had built when she became a widow. Altha had complications from back surgery in 2010 which caused her to move into an assisted living apartment. However, in 2012 she checked herself out.  She lived in her house and continued to drive until two months ago when she admitted she needed more help and moved back to assisted living “for the winter.” She enjoyed visiting with people and did so up to her last day. That day she visited with people on the phone, other residents of her apartments and had coffee with her family. She had a life well lived.
Altha is survived by a son, Dean (Carol) Carlson of Kennedy, Minn.; two daughters, Dianne (Lawrence) Wilkie of Shoreview, Minn., and Dori (Mark) Helgeson of Park River N.D.; nine grandchildren, Kara, Kevin, Lisa, Melissa, Alan, Todd, Andrew, Seth and Ian; eight great-grandchildren; a brother-in-law, Jim Sutherland and a sister-in-law, Deanne Westerberg.
She is preceded in death by her parents; three brothers, Glen, Gordon, and Roger; and two sisters, Ruth and Phyllis.
A celebration of life will be held Saturday, Jan. 19, 2019, at 11 a.m. at Grace Lutheran Church of Hallock. Interment will be in Greenwood Cemetery, Hallock. Visitation will be held on Friday, Jan. 18 from 6 to 8 p.m. in Austin Funeral Chapel, Hallock with a prayer service at 7 p.m. Rev. Frank Johnson, presiding. Special music by the Popple Ridge Pickers. Casket bearers will be Joel Muir, Phil Muir, Ed Lehrke, Mark Johnson, Andy Olson and Nathan Younggren.  Honorary casket bearers will be Altha’s grandchildren and great-grandchildren.
Austin Funeral Chapel, Hallock, is in charge of the arrangements. www.austinfuneralchapel.com.