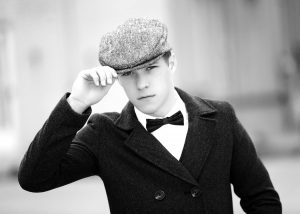 Lance Cpl. Riley Stephen Kuznia, 20, was born on Sept. 17, 1998 in Bemidji, Minn., to Adam and Markelle Kuznia. Riley was tragically killed in the line of duty on Jan. 1, 2019, at the Marine Barracks in Washington D.C., serving the country he loved. Riley felt that he needed to give back to his country but also challenge his mind, body and soul, which ultimately lead him to become a United States Marine.
Riley was baptized at Assumption Catholic Church of Florian, Minn., and was confirmed at First Lutheran Church of Karlstad, Minn. Riley grew up in Karlstad and attended Tri-County School until graduating in 2017. Art, shop, recess and lunch being his favorite subjects in school. He was involved in student council, and of course his beloved hockey. He was passionate about the sport, worked hard, always maintained a positive attitude and felt a brotherhood with his teammates. Anybody that knew Riley knew he loved to work hard and make money. He was lovingly known as squeaky cheeks. He worked as a farm hand throughout his high school years, developing a great love for cattle and farming.
As a well known businessman, Riley and his hometown friend, Bennett Amb co-founded Amb Outfitters, giving himself the title of CEO. This instagram page was developed out of their love for the outdoors, including hunting and fishing. Riley loved and respected nature and cherished deer hunting in the fall with family, duck hunting with friends, and fishing with anybody that had a rod, who could tolerate mosquitoes and didn’t mind the frigid cold Minnesota winters.
Riley was a man of many dreams. After serving his country, Riley planned on going to school to pursue a career in construction, one day hoping to own his own company. He was going to marry his soulmate, Ali, and have children, one of them being named after his all time favorite hockey player, Alex Ovechkin. (Go figure.)
He also planned on building a big lake home and owning a Ford Raptor. His family and friends will always remember his contagious smile, dry humor, determination, drive, selflessness and his ability to comfort others.
Riley is survived by his mother, Markelle Kuznia; father, Adam (Andrea) Kuznia; all of Karlstad; brother, Spencer; sister, Morgan, both of Bemidji; sister,  Ari, Karlstad; soulmate, Ali Undeberg, Fargo, N.D.; grandparents, Mark (Janet) Kujava, Lonnie Kujava, Conrad Kuznia, Linda Kuznia; great-grandfather, Aime St. Germain; as well as aunts, uncles, cousins and all other extended family. He is preceded in death by several family members.
Funeral services were held Saturday, Jan. 12, 2019, at 2 p.m. in the Karlstad High School Gymnasium. Interment was in the Salem Cemetery, rural Karlstad. Visitation was held at First Lutheran Church in Karlstad on Friday evening from 6 to 8 p.m. with a prayer service at 7 p.m.
Austin Funeral Chapel, Hallock, Minn., was in charge of the arrangements.