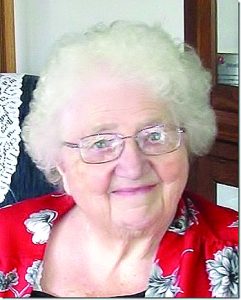 Geraldine Hultgren passed away Monday, Jan. 14, 2019, at the Karlstad Nursing Home in Karlstad, Minn., at the age of 82½ years old.
Geraldine Lavonne (Wollin) Hultgren was born to the late Amy (Brekke) Wollin and George Wollin on July 19, 1936, in Arveson Township east of Karlstad.  Geraldine grew up on a farm in Arveson Township of Kittson County near Karlstad.  She was baptized and confirmed in the Lutheran faith at First Lutheran Church in Karlstad.  Geraldine attended Karlstad Public Schools and graduated in June 1954.
Following graduation, Geraldine moved to Minneapolis for a short time working as a nanny for a family there.  After this time, Geraldine moved back to Karlstad and worked at the local drug store.  During her return to Karlstad, she met and dated Duane K. Hultgren and on June 30, 1957, Geraldine was united into marriage to Duane at First Lutheran Church in Karlstad. They made their home in Karlstad and raised their eight children together, Mark, Gregory, George, Harry, Amy, Ann, Steven and Elizabeth.  Geraldine took pride a second time around in raising her grandson, Anthony, and also had an active role in raising her grandson, JR. Just like the children’s playmates growing up, one more child around was never too many for her!
In 1975, Geraldine decided it was time to get out of the house and went to work at the Karlstad Nursing Home as an assistant. She worked there for 2½ years.  Geraldine also did book work and individual income tax preparation for several people.
In 1978, Geraldine decided that she would like to further her education.  She enrolled at the A.V.T.I. in Thief River Falls, Minn., for a 2-year Associate Arts Degree in Accounting, graduating in June of 1980 with that degree. She put her degree to good use as she did income tax preparation and bookkeeping work for the next 33 years.
Geraldine was an active member of the First Lutheran Church in Karlstad. She taught Sunday School, week-day school and confirmation classes for many years. She also sang in the choir, was an active member of the First Lutheran Ladies Aid group, was also a deacon and a member of the church council.  Geraldine also led the church and organizations in the 75th Anniversary Celebration of the First Lutheran Church.
Geraldine was also involved in community activities such as a past American Legion Auxiliary President and member, a Cub Scout Mom, as well as working with the music and sports boosters, just to name a few.
Duane Hultgren passed away on Dec. 5, 1997, in Karlstad and Geraldine continued to make her home in Karlstad.  Geraldine continued to live at home until 2014 when her health deemed it necessary for her to live at the nursing home in Karlstad.
She is survived by her children:  Mark (Dorothy Grandstrand) Viking, Minn.; George, Karlstad; Harry (Peggy), Warren, Minn.; Amy Nelson (Mel Hershberger), New Richmond, Wisc.; Ann Christinson (Dave Anderson), Strandquist, Minn.; Steven (Cheryl Thompson) Cottage Grove, Minn.; and Elizabeth (Dave Christinson), Strathcona, Minn.;  grandchildren:  Anthony, Karlstad; Krista, Becker, Minn.; JR (Nikky Christinson), New Richmond; Kara, Cannon Falls, Minn.; and Barrett, St. Cloud, Minn.; and Chris Rominski, Warren, Minn.; great-grandsons:  Kaiden Christinson, New Richmond; Caleb Olson and Luke Johnson, New Richmond; brothers:  David (Tove) Wollin, Grand Forks, N.D.; Russell (Grace) Wollin, East Grand Forks, Minn.; sisters: Margaret Klug, Minot, N.D.; and Lola (Mike) Underdahl, Newfolden, Minn.; uncle and aunt, Bob and Betty Wollin, Greenbush, Minn.; and several cousins and other relatives.
Geraldine is preceded in death by her husband, Duane; parents; son, Greg; and siblings, Jim Wollin and Anita Westling.
Memorial services for Geraldine Hultgren will be held Saturday, Jan. 26, 2019, at 2 p.m. at First Lutheran Church of Karlstad.
Visitation will be 1 hour before services.
Collins Funeral Homes, Karlstad, is in charge of the arrangements.