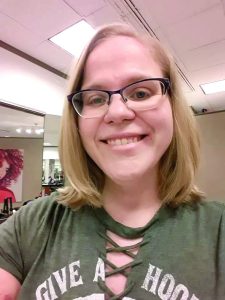 Joanna Alice (Olson) Cole, 35,  was welcomed into heaven from her home on Jan. 13, 2019, after a courageous battle with cancer.
Joanna was born on Sept. 7, 1983, at Saint Luke’s Hospital in Duluth, Minn., to Bernard and Sandra. Joanna was a Majorette and a football player. She participated in choir, theater and Knowledge Bowl, and was involved in her church. She was an all-around “Star.” She graduated from Cloquet Senior High in 2002 and went on to graduate from Bemidji State in 2006.
While in college she met the love of her life, Jon, in 2005. Joanna married Jon May 24, 2008. Joanna began working for Kittson Memorial Healthcare Center as an activity aide in 2009. Jon and Joanna welcomed Alice Helene Cole on Jan. 25, 2011. Her daughter will remember her as a kind, patient mother who encouraged her to pursue her goals and be herself.
Joanna was an active member in her church. She taught Sunday school and participated in the praise team. Joanna was a beautiful soul who loved her family and friends, and was passionate about our Lord. Joanna enjoyed knitting and everything stars.
Joanna is survived by her loving husband, Jon and her daughter Alice of Humboldt, Minn.; brother Chris Olson of Proctor, Minn.; in-laws Jamie and Carlene Cole of Humboldt; Jon’s Grandma Reba of Hallock, Minn.; and many aunts, uncles, cousins, and friends.
She is preceded in death by her parents Bernard and Sandra Olson; grandparents Carl and Alice Mattson; and grandparents Lester and Anna Olson.
Visitation was held Jan. 17, 2019, at Lancaster Covenant Church from 6 to 8 p.m. with a prayer service at 7 p.m. Funeral services were held Jan. 18, 2019, at Lancaster Covenant Church at 10:30 a.m., with a reception following at the church. Pastor Galen Nordin officiated the ceremony. All were welcome to attend and celebrate Joanna’s life.
In lieu of flowers, send donations to Kittson County Hospice, P.O. Box 700, Hallock, MN 56728 or The American Cancer Society.
Joanna’s family would like to thank all the wonderful nurses and doctors at Mayo in Rochester, everyone at Kittson Memorial Healthcare Center, and Kittson County Hospice. The loving support from family, friends, church and community has been greatly appreciated.
Austin Funeral Chapel, Hallock, was in charge of the arrangements.