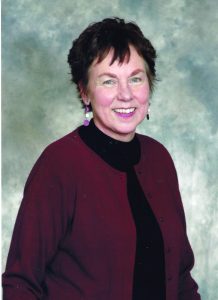 Lana Kay Fossell passed away peacefully on Jan. 15, 2019, at Altru Hospital in Grand Forks, N.D., surrounded by her family.
Lana was born Nov. 21, 1944, to Einer and Edna Kjergaard in Lake Benton, Minn. She was their fourth daughter and had a younger brother. She attended high school at West Central School of Agriculture in Morris, Minn. Lana went to Grand View College, Des Moines, Iowa (a school founded by the Danes) and to Wartburg College, where she received a B.A. in Social Work and Religion. Lana worked at a variety of jobs and traveled the U.S. for almost a year and worked as a Research Assistant in Child Development at the University of Minnesota.
She married Ronald Fossell on Sept. 11, 1976, and in April 1977, they moved to Hallock, so Ron could farm the family farm east of Kennedy. Lana always felt so blessed that she could be a stay-at-home mom with their two daughters. During that time she volunteered for the American Cancer Society and helped start Hallock Welcome Wheels, plus volunteered in many other areas.
Lana was a member of Grace Evangelical Lutheran Church and served by singing in the choir, president of WELCA, leading Bible Study for Moms, organizing VBS for preschoolers, leading Sunday School music for nine years and supervising Altar Guild. She worked at the USDA FSA office for about a year and was the Library “Story Lady” for about a year and a half and later worked as a substitute librarian at the Hallock Public Library. Lana received her energy from being around people and this need was thoroughly met while working as Grace Lutheran Church secretary from 1997 to 2010. She felt fortunate to work there and be able to get to know so many wonderful people. Lana’s interests included organizing whatever, being with people, singing, reading and most of all flowers and being outdoors. She liked birds, penguins, snowmen and loved sunrises and sunsets.
She is survived by her husband, Ron, Kennedy; daughters, Julie (Eric) Sorell, Minneapolis and Melinda (Josh) Langlie, Northfield, Minn.; a grandson, Olin Langlie; sister, Merna (Fred) Salmon; brother, Steve Kjergaard; sisters-in-law, Janice Gilbertson and Judy (Jude) Gardner and several nieces and nephews.
She was preceded in death by her parents; two sisters; two sisters-in-law; two brothers-in-law; and a niece.
Memorial services were held Sunday, Jan. 20, 2019, at 2 p.m. in Grace Lutheran Church, Hallock. Interment was in Jupiter Cemetery, rural Kennedy. Rev. Frank Johnson, presided; Lyndon Johnson, soloist and Jillayne Kraska, soloist; Janice Gilbertson and Judy Gardner, prelude music, Grace Lutheran Church Choir and Renee Wahl, organist. Honorary pall bearers were Wednesday’s Women’s Bible Study and the Grace Quilters. Visitation was held on Saturday from 6 to 8 p.m. in Austin Funeral Chapel, Hallock with a prayer service at 7 p.m.
Lana’s family prefers memorials to the Minnesota Ovarian Cancer Alliance at 4604 Chicago Ave. Minneapolis, MN 55407.
Austin Funeral Chapel, Hallock, was in charge of the arrangements.