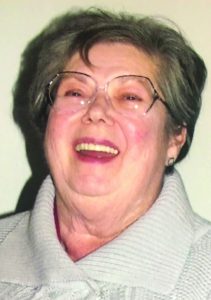 Sandra Carolyn Bouvette, 75, passed away peacefully at Bethany on the Lake Nursing Home in Alexandria, Minn. on Jan. 13, 2019, surrounded by her family.
Sandra was born to Stanley and Evelyn (Bostad) Swenson in Hallock, Minn., on Jan. 27, 1943. She attended Kennedy Public School and graduated in 1961. She attended Concordia College Moorhead and Wahpeton School of Science for Nursing. She moved to Minneapolis where she worked for Dayton’s, Abbott Hospital, AAA and Franklin National Bank.
Sandra and Joe Bouvette were united in marriage on Sept. 19, 1964 at Red River Lutheran Church. They moved to Minneapolis where Joe pursued his career in dentistry. In 1965, they moved to Hallock to start his practice and their family.
Sandra was an accomplished musician, playing piano, organ, accordion and clarinet. She sang and played with her father in his band, Knights of Rhythm, on a few occasions. Even in the nursing home, she continued to play her piano for pleasure and for programs. Sandra taught piano lessons and she was one of the mothers who began the Tiny Tots program in Hallock where she was able to entertain and teach the small children, sharing her love for music.
She sang in the choirs of Red River Church and Grace Lutheran, and loved when she had the chance to sing with her sisters. She was often called upon to sing at weddings and other occasions. At Grace she was a member of LCW and a leader of the Pioneer Girls. She was also a Sunday School teacher.
Her Bible reading and devotions meant so much to her. She continued this practice daily while in the nursing home. Her main love was raising her two daughters, Rhonda and Angela, sharing with them her love of Jesus and teaching them to treat others with kindness and love. She adored her grandkids, visiting with them at Hallock and  the lake place in Walker, playing hours of board games (letting them cheat), competitive games of Clubs Trump, painting, reading, playing the piano and never missing a trip to Dairy Queen or Jimmy’s restaurant.
While living in Hallock, Sandra had various jobs. She worked at the Sterling Mini Mall’s Bible store and Stable and Corral. She also assisted Joe in his dental office and was a server at the Mileage Cafe.
Sandra is survived by her husband, Joe, of 54 years; two daughters, Rhonda (Scott) Bouvette Berger of Alexandria, and Angela (Robert) Pioro of Duluth, Minn.; grandchildren, Joseph, Emily and Ben Berger and John, Jacob and James Pioro; sisters, Marlene Swenson of Hallock, Mary (Dan) Juhl of Red Lake Falls, and Debi (Bruce) Jensen of Moorhead; two sisters-in-law, Hope Thornberg of Golden Valley, Minn., and Catherine (John) Lloyd of Plymouth, Minn.; aunts and cousins; 10 nephews and two nieces.
Sandra was preceded in death by her parents, infant brother, and brother in law, Jerry Kramer.
Memorial services are scheduled for Sunday, Jan. 27, 2019, at 3 p.m. in Grace Lutheran Church, Hallock. Interment will be in Greenwood Cemetery, Hallock. Visitation will be held at the church for one hour prior to the service. Rev. Frank Johnson, presiding; special music, Angela Pioro, Emily Berger, Galen Nordin and Renee Wahl. Honorary casket bearers will be Sandra’s grandchildren.
Austin Funeral Chapel, Hallock, is in charge of the arrangements.