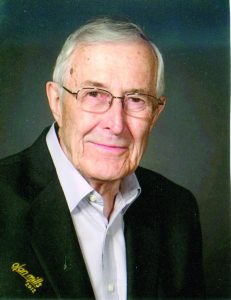 Calvin “Cal” Engelstad, died Feb. 11, 2019, at the age of 91.
Calvin was born in Fargo, N.D., lived in Crookston, Minn., and came with his parents to Hallock, Minn., in 1936. He graduated from Hallock High in 1945 having participated in Music and Athletics.
He was in the U.S. Navy from 1946-1948.
Cal attended the University of Minnesota, was a hockey letter winner, and graduated with a B.A. degree as an accounting major in 1951. Cal worked for Farmhand, Inc. for 35 years and retired as Corporate Controller in 1991.
He and Nola lived in Eden Prairie, Minn., and spent 15 winters in Tuscon, Ariz. He enjoyed playing golf until he was 85, and was an avid reader of the newspaper and books. He and Nola have been members of Westwood Lutheran Church in St. Louis Park since 1953, and Cal is a past president and treasurer of the congregation.
Cal will be missed by his wife of 68 1/2 years, Nola; children, Alan (Diane) Engelstad, Amy (Curt) Ringhausen, and David Engelstad; granchildren, Jeremy and Faith Engelstad; sister, Marlys Anderson, and many other loving family and friends.
He was preceded in death by his parents, Alfred and Emma Engelstad.
A memorial service was held Saturday, Feb. 16 at 10:30 a.m. at Westwood Lutheran Church, 9001 Cedar Lake Rd, St. Louis Park.
Washburn-McReavy Eden Prairie Chapel was in charge of the arrangements.