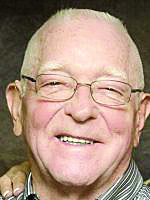 Harris E. Nordin, 77, of Strasburg, Ohio, went home to be with the Lord on Sunday, February 10, 2019 at Community Hospice House at New Philadelphia, Ohio, following a recent illness.
A son of the late Olaf H. and Helen E. (Burnell) Nordin, Harris was born Dec. 18, 1941, at Hallock, Minn.
He graduated from Lancaster High School in Lancaster, Minn., in 1959.
On Dec. 2, 1967, Harris married his best friend, the former Jeanette Paul. He was a veteran of the United States Army and he was proud of his employment with International Harvester, Gradall and the Kimble Company where he eventually retired.
Harris was a man of great faith and he was an active member of the Church of New Hope at Dover where he held many positions over the years. He had a passion for the outdoors which he developed as a young boy growing up on his family farm. Harris loved being in the woods, fishing, gardening and taking care of the “critters” around his home such as the deer, squirrels and birds. Most of all, he enjoyed teaching his grandchildren and great-grandchildren about the outdoors.
He is survived by his wife of 51 years, Jeanie Nordin; two daughters, Kelleen (John) Tate and Kimberly (Bob) Fahrni; his grandchildren, Sandra Langford, Pamela (Mark) Barrett, Michelle (Chance) Gillespie, Jacob Tate, Jessica (T.J.) Thorson, Kajsa (Ryan) Patterson, Kristen Patterson and Destiny Fahrni; his great-grandchildren, Alex Villa, Logan and William Barrett, Tyson and Lillian Gillespie, Harris Hardy and Aubree Wallick; his siblings, Lois Boroski, Dennis (JoAnne) Nordin, Carl (Ellie) Nordin, Ron (Layl) Nordin, Judy (Dan) Remer, Randy (Peggy) Nordin, Peggy (Joe) Wilbeski, Arlen (Janet) Nordin, Faye (Chuck) Potrament and Galen (Julie) Nordin; and numerous beloved nieces and nephews.
Harris was preceded in death by his parents: two sons, Mark and Chris Nordin; a grandson, Justin Boney; a brother, Jim Nordin; and two brothers-in-law, Doug Whitlock and Frank Boroski.
Visitation was held on Friday, Feb. 15, 2019, from 10 a.m. to 12 p.m. in the Geib Funeral Center at Dover. A funeral service celebrating Harris’ life followed at 12 p.m. in the funeral home with Pastor Dan Legg officiating. A luncheon followed the service at Church of New Hope.
The family suggests, in lieu of flowers, contributions be made in Harris’ memory to Community Hospice, 716 Commercial Avenue SW, New Philadelphia, OH 44663 or to Church of New Hope, Sound System, 3374 Schneiders Crossing Road NW, Dover, OH 44622.