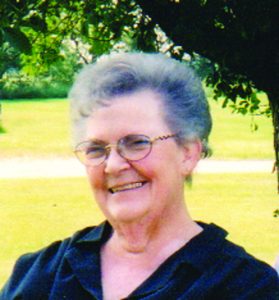 Shirley M. Ehrenstrom, 83, of Lake Bronson, Minn., passed away at Bethany on University in Fargo, N.D., on Wednesday, Feb. 27, 2019.
Shirley Mae Allar was born to Frank and Florence (Little) Allar, Nov. 2, 1935. Her family lived in Brighton, Marathon County, Unity, Wis. Shirley attended Unity public school through the sixth grade. Shirley’s parents then bought another farm by Spencer, Wis., where she attended country school for two years. Then Shirley attended Spencer high school and graduated in 1953. Her parents were dairy farmers and Shirley helped her parents on the farm with harvesting crops and milking cows.
After graduation, she worked at the Weinbrener Shoe Factory in Marshfield, Wis., where she met Leonard Ehrenstrom. They were married on Feb. 5, 1955. They moved to Lake Bronson where Leonard worked for Virgil Bockwitz at Humboldt, Minn. In the winter of that year they moved back to Spencer, where their daughter was born. For the winter months, Leonard worked odd jobs and then got a job as an auto mechanic. They moved to the village of Spencer, where their sons Scott and Kevin were born. They moved to Plymouth, Wis., for several years.
In 1966, they moved back to the family farm at Lake Bronson. They had a few cows and chickens and pigs. Shirley worked at Mileage café for two years and then was a night cook at Community Coffee Cup in Lake Bronson until it closed in 1970. From there, she worked at Arctic Cat. When Todd and Tadd were born, she became a stay-at-home mom.
In 1986, Shirley became a CNA at Kittson Memorial nursing home for 16 years. She really loved working with the residents. She loved helping the elderly. When she left to go home at the end of her shift,  Shirley always felt she had made somebody’s day brighter because it made her day.
They had five children, Linda, Scott, (special friend Jane), Kevin (Cindy), Todd and Tadd (Kathy); five grandchildren, Ellie Mercil, Jesse Lowell, Amanda Ehrenstrom, Bailey and Bryce Ehrenstorm; a great-grandson, Jordan Mercil, five step-grandchildren, three step-great-grandchildren; one brother, David (Judy); and sister-in-law, Doris.
Shirley was preceded in death by mother, father, husband, Leonard;  four brothers, Gilbert, Richard, Gerald and Eugene; a sister, Sandy; and daughter-in-law, Kelly.
Celebration of Life services were held Monday, March 4, 2019, at 11 a.m. in Zion Lutheran Church, Lake Bronson. Visitation was held at the church for one hour prior to the service. Pastor Kathy Levenhagen, presided; Peggy Wilebski, organist and Faye Potrament, soloist.
Austin Funeral Chapel, Hallock, was in charge of the arrangements. www.austinfuneralchapel.com