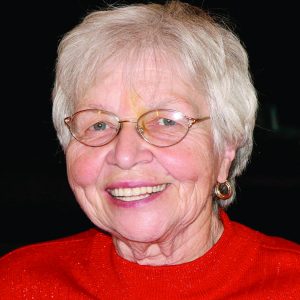 Pearl Adeline Loeffler, 84, of Hallock, Minn., died on Feb. 26, 2019, at Scripps Mercy Hospital in San Diego, Calif.
Pearl Adeline Hallebrot was born March 31, 1934, in Erskine, Minn., the daughter of Ole and Carrie (Dovery) Hallebrot. She was baptized and later confirmed at Saron Norwegian Lutheran Church (she was a proud Norwegian).
She was raised in rural Erskine, where she often skied two miles to Badger Prairie School District #160. Adeline spoke only Norwegian until she started elementary school. She attended Erskine High School.
As a young woman, Adeline moved to Thief River Falls, Minn., and worked at the Rex Cafe and Woolworths. She also enjoyed singing on KROX radio station. She met Francis Henry Loeffler at a hay dance in St. Hilaire, Minn. They were married Jan. 10, 1953, at St. Bernard’s Catholic Church. She later converted to the Catholic faith. They resided in rural Thief River Falls living across the field from the Loeffler farm.
Francis was employed in construction and they moved several times to wherever the work was in Minnesota and the Dakotas. They maintained their home in Thief River Falls and as their family grew to nine children, the house that Francis built grew along with them. Francis started working in the gravel and cement industry and they established Loeffler Redi-Mix in Pembina, N.D., where Adeline worked as the office manager.
After several years of traveling for work, Francis came home one day and told Adeline to start packing up the house and the kids because they were moving to Pembina as soon as a house could be built. In 1967, the move was made and in 1969, their son, Jonathan was born, completing the family of 10 children.
The business relocated to Hallock in 1972 and the family moved in 1975. Francis passed away suddenly in 1976, leaving Adeline to raise the seven children remaining in school on her own. With a lot of determination and hard work, she continued to own and operate the family business until her retirement in 1996.
She made her family her priority.  Adeline will be remembered for her strength and faith in God, her gift of friendship, and her ability to adapt and overcome any hardship she faced. She was actively involved in her children’s and grandchildren’s lives and never missed a milestone celebration for any of them. She enjoyed travelling and visiting with people and was especially happy when she was able to go to Norway. Adeline always found a connection to everyone she met so no one remained a stranger for long. She proudly served her community in many activities including Election Judge, American Legion Auxiliary, Blood Drive, Boy and Girl Scouts and Meals on Wheels. She was also active in her church, serving as a religion teacher and St. Patrick’s Guild member.
She is survived by her children, Monica (Gerald) O’Hara of San Diego; Patricia Hutchinson of Grand Forks, N.D.; former daughter-in-law, Laurie Loeffler of Thompson, N.D.; Michael (Susan) Loeffler of Fort Worth, Texas; Rosalie (Ken) Loeffler-Kemp of Duluth, Minn.; Karen (Dan) Carpenter of Warroad, Minn.; Colleen (Mick) Lind of Sartell, Minn.; and Bryan (Sherri) Loeffler of Grand Prairie, Texas; 26 grandchildren; 24 great-grandchildren; brother-in-law, Waldo Thompson of Thief River Falls and cousin, Margaret (Dennis) Lee of Red Lake Falls.
She was preceded in death by her husband; parents; sons, Jonathan, Kevin, and Terrance; sister Lyla; brothers, Orville and Norman; numerous brothers and sisters-in-law; and many nieces and nephews.
The funeral was held at 11 a.m., with visitation one hour prior, Saturday, March 9, at St. Patrick’s Catholic Church in Hallock. Officiating was Father David Loeffler with Father Xavier Ilango concelebrating. Kileigh Carpenter and Christopher Loeffler, duet; Sharlene Klegstad, organist. Casket bearers were John Hutchinson, Erica O’Hara, Amber Kopperude, Rachel Loeffler-Kemp, Kyle Loeffler, Nolan Lind and Jonathan Loeffler.
Visitation was held from 6-8 p.m., with a prayer service at 7 p.m., Friday, March 8, at the church. Interment will be at a later date in St. Bernard Cemetery in Thief River Falls.
Blessed be her memory.
Austin Funeral Chapel, Hallock, was in charge of the arrangements. www. austinfuneralchapel.com.