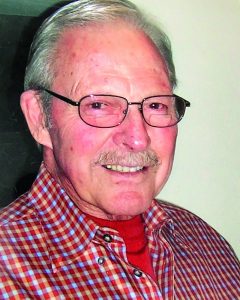 Warren Lee Kinshella, 88, passed away on Feb. 27, 2019, from complications from COPD.
He was born Nov. 14, 1930, in Hallock, Minn., to Ethel and Gilbert Kinshella.
Warren lived his early years in Hallock and graduated from Hallock High School in 1948. He served in the Army during the Korean Conflict.  After discharge, he worked in construction and moved to San Diego in 1957.
Warren married Ortie McEwen of Humboldt, Minn., on Oct. 7, 1950. They were married for 68 years and have one son, Dr. Craig Kinshella (Patty).
Warren worked as a carpenter before becoming a master building contractor and building inspector.  He retired after 58 years in the industry and continued to share his talents and skills through his philanthropic service.
Warren is survived by his wife, Ortie; son, Dr. Craig Kinshella (Patty); two grandsons: Michael Kinshella (Poli), Matt Kinshella (Caitlin); two great-grandchildren: Adler Kinshella and Oliver Kinshella; his Aunt Mildred Solem; brother-in-law, Neil McEwen (Maxine); sister-in-law, Elizabeth Deere; nieces, nephews and cousins.
His parents precede him in death, as well as, brother Dennis, five sisters-in-law, and six brothers-in-law.