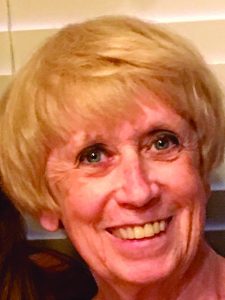 Janice Marie (Bowman) Clay, 76, San Antonio, Texas, passed away at her home March 6, 2019, and is now with her Lord and Savior.
Janice was born to Les and Minnie Bowman in Kennedy, Minn., on June 22, 1942.  She attended Kennedy Public School and graduated in 1960. Upon graduation she attended Dental Assistant School in Minneapolis, Minn. After completing dental assistant school, she moved to Grand Forks, N.D., and worked for Leo Bell Accounting and later for Joe Bouvette, DDS, in Hallock, Minn.
On April 21, 1962, she was joined in marriage to Alan (Dick) Clay of Hallock, who was serving in the United States Navy. Over the next 16 years, Janice and Dick lived the life of a Navy family, residing in locations such as McAlester Okla.; San Diego, Calif.; China Lake, Calif.; and Iwakun, Japan, before settling down in Hallock in 1978. Janice was very active in church and school activities during their time in the military.
Upon Dick’s retirement from the Navy and their return to Hallock, she assisted in the operation of Clay’s Bootery until they sold it in 1992. In addition to helping run the shoe store, Janice was a teacher’s aide at the elementary school and helped manage Two River Golf Course in the summer. After selling Clay’s Bootery they began their second retirement and became “snowbirds,” traveling between Walker, Minn., and Tampa Bay, Fla., for a number of years, eventually becoming permanent residents of San Antonio in 2001 to be closer to their daughter and her family.
Janice enjoyed her time living in San Antonio, spending much of her time with children and grandchildren. She loved volunteering once a week at Harmony Elementary School and regularly attending Cornerstone Church. She and Dick spent vacations visiting their son and his family in locations throughout the US and Japan.  Janice wanted to be remembered as a “Child of God,” whose purpose became a goal of pleasing and loving the Lord with all of her heart and soul.
Janice is survived by her husband Dick of 56 years; two children, son, Derrik (Beverly) Clay of San Antonio and daughter, Jori Bjugstad of San Antonio; grandchildren, Courtney, Samuel and Walker Clay and Conner and Callie Bjugstad; brother, Merlyn (Gloria) Bowman of Eugene Ore.; and sister, Kathy (Roy) Stenmark of Lancaster, Minn.; two brothers-in-law, Robert Clay of Sacramento, Calif., and Paul (Theresa) Clay of Hallock; and sister-in-law, Andrea (Jim) Hotzfield of Pelican Rapids, Minn., as well as numerous nieces, nephews, and cousins.
Janice was preceded in death by her parents, sister, Golda, brother, Darryl, father-in-law, Ruggles Clay and mother-in-law, Elsa Clay.
Memorial services were held Friday March 22, 2019, at Neptune Funeral Services of San Antonio. In lieu of flowers, the family has asked that donations be made to the National Cancer Research Center.