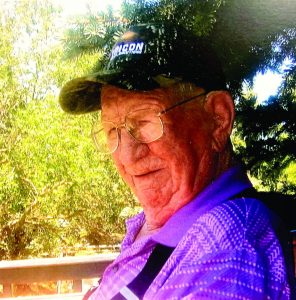 Carroll Ray Nicholson, 92, Apache Junction, Ariz., passed away on Feb. 21, 2019.
Born to Roy and Nora Marie Weberg Nicholson on Christmas Eve in 1926 in Kittson County, Hallock Village, Minn. Ray grew up on the family farm near Lancaster, Minn., together with his brother, Richard (Dick) Nicholson. He answered the call to service of his country in 1944 by enlisting in the US Navy. He had several posts of duty, notably the USS Burrows at Tokyo Bay when Japan surrendered on Sept. 2, 1945. Ray achieved the rank of Motor Machinists Mate 3C y completing both Basic Engineering and Diesel School before being honorably discharged in June 1946.
Upon discharge, Ray returned home to Minnesota where he worked odd jobs utilizing heavy equipment mechanical expertise. He also met and married wife of 51 years, Caroline Ann Peterson in 1949 and began a family soon after in 1950 with the birth of first son, Rickey Carrol in Hallock. Scott Ray was born straight away in 1951, also in Hallock. Considering a growing family, Ray ventured afield to find better employment. He had heard about a dam project in North Dakota, known as the Missouri River Project, Garrison Dam and began work there in 1951. When that project was finished he was moved on to Pierre, S.D., as a maintenance shift supervisor, also on the Missouri River Project, Oahe Dam. There Randy Allan was born in 1956 and they stayed until 1958. Ray had earned quite a reputation as a maintenance supervisor/manager. In 1958, he was hired by Western Contracting as a maintenance supervisor at Kennecott Copper in Salt Lake City, Utah. He would go on to work for Western on projects in Utah, California and Wyoming. The family always traveled with him. In 1969, he was offered a position with Kerr McGee as a maintenance supervisor opening Shirley Basin Mine near Casper, Wyo. He continued to work for Kerr McGee on other mine projects in Wyoming when in 1982 he was offered a position as maintenance supervisor for a coal mining project opening in Grants, N.M., known as Lee Ranch Mine with Santa Fe Pacific Coal. He never lived in New Mexico and still had wanderlust in his veins and an eager partner in Carol. One thing led to another with diversification by SF Pacific and as Ray was nearing retirement he was asked to relocate to Winnemucca, Nevada in 1989 to open the newly acquired Rabbit Creek Gold Mine. Finally in December of 1991 they retired and returned to New Mexico where they had purchased a home in the community of Navajo Dam. Ray continued to consult until 1993 when he decided it was time to fully enjoy retirement.
Even though Ray worked hard to support his family he still made time to share with them camping, hunting, fishing, boating and various outdoor activities. He also shared and taught all three boys, helping them to develop mechanical aptitude and they would later find success in that field as well. He had a large base of friends and they often congregated together to enjoy activities like Cheyenne Frontier Days and caravanning about in the United States, Canada and Mexico. Ray and Carol had built a more permanent residence in Wellton, Ariz., to winter in warmth. Upon Carol’s passing in 2001, Ray opted to sell and return to his travel trailer for the freedom of an open road. He enjoyed many trips to Minnesota to visit family and friends and his winter in Arizona until poor eyesight grounded him in 2011. Being resourceful, Ray enlisted various “drivers” until he found Bernice Gustafson, living nearby in Blanco, who was a mesh to his personality and temperament. The relationship developed to companion and later partner, with numerous cruises and escapades. Ray and Bernice married on Valentine’s Day 2018 in Apache Junction, Ariz.
Carroll is survived by spouse, Bernice; only brother, Richard (Dick); youngest son, Randy (Amy); granddaughters, Julie Kalmer, Tonya (Martin) Holbrook, Caroline (Collin) Placke, Sheena (Todd) Gerstenberger, Tori (Eric) Morence; great-grandchildren, Reide Placke; Ari, Darius and Grae Holbrook, Clarissa, Madison, Anna and Eric Morence; and numerous nieces, nephews and cousins.
He was proceeded in death by  both parents; first wife, Carol; two oldest sons, Rick and Scott; grandson, Timothy; and sister-in-law, Maureen.
A memorial service was held Feb. 23, 2019, in Apache Junction. A celebration of life was held April 13, 2019, at Community of Navajo Dam. He will be commended to the Lord May 23, 2019, 10:30 a.m. at Sion Lutheran Church, Lancaster, with interment at Hallock, Minn.