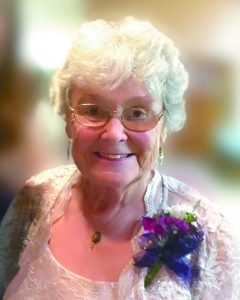 Dorothy Lawrence entered her eternal home on Friday, Feb. 15, 2019.
She was born on March 13, 1927, on a farm of her grandparents, Peter and Geske Janssen in Cottonwood County, near Heron Lake, Minn.
At two years of age, she and her parents, Emil and Emma Schlapkohl moved to a farm in Nobles County, near Reading, Minn. There she attended country school through eighth grade. She graduated from Worthington High School in 1946. Dorothy continued her education by attending Blue Earth Teachers College and Bemidji State University. She then taught country school in Nobles County for several years.
Dorothy married Sidney Lawrence on Dec. 21, 1948, at the Mission Baptist Church in Worthington, Minn. They farmed in the Rushmore and Wilmont area until they moved to Hallock, Minn., in July of 1963.
Dorothy worked for the Kittson County Soil and Water Conservation District for several years before she began working at the Hallock Clinic. She retired from the clinic in the summer of 1987.
In the fall of 1987, Dorothy and Sid moved to Park Rapids, Minn. They began traveling in their Airstream RV. Their travels took them to all 50 U.S. states, two-thirds of the states in Mexico, and all Canadian provinces, with the exception of Newfound-land. They also traveled and toured much of Europe.
Her hobbies included golfing, knitting, crocheting, Swedish weaving, counted cross stitch, gardening, reading and playing cards. Weather permitting, she enjoyed many years of riding their Harley in both Minnesota and Texas.
Dorothy attended the Methodist Church in Park Rapids but was a member of the Presby-terian Church in Hallock. She belonged to the Headwaters Chapter of Good Sam and the Itasca Region Pioneer Farmers.
Dorothy is survived by Sid, her husband of 70 years; four sons:  Bruce (Lynae) of Thief River Falls, Minn., Michael (Julie) of Park Rapids, Thomas (Emmy) of Menagha, Minn., and James (Theresa) of Stevens Point, Wis.; two daughters: Kay (Laren) Sauter of Box Elder, S.D. and Barbara (Frank) O’Hara of Pembina, N.D.
She is also survived by 25 grandchildren, 25 great-grandchildren, two great-great-grandchildren and many nieces and nephews.
Also surviving are her sister, Minnie Apel; brother, Herman Schlapkohl; sisters-in-law, Kay Scott and Norma Nelson; and son-in-law, Philip Muir.
She was preceded in death by her parents; an infant brother; brother, Eugene Scott; sister, Helen Van Roekel; daughter, Patricia Muir; great-granddaughter, Maci Lawrence; in-laws Melvin Van Roekel, Kenneth Apel, Roger and Lorraine Lawrence, and Curtis Nelson.
Dorothy was a truly kind and caring person. There was no one she wouldn’t talk with and show an interest in their well being.
A celebration of life will be held at First Presbyterian Church in Hallock on Saturday, June 1, 2019, at 11 a.m. Interment will be in Union Liberty Cemetery, rural Hallock. Visitation will be held at the church for one hour prior to the service.
Austin Funeral Chapel, Hallock, is in charge of the arrangements. www.austinfuneralchapel.com.