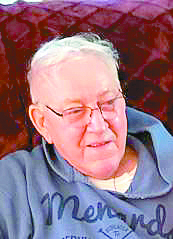 Arnold Christian, 81, of Kennedy, Minn., passed away at his home on Sunday evening, June 30, 2019.
Arnold Oliver Christian was born Nov. 28, 1937, at Warroad, Minn., to James and Ethel (Pommeraning) Christian. Arnold’s family moved to Kennedy when he was a young boy and he attended school there. Arnold enlisted in the U.S. Air Force and served until his retirement from military service in 1977.
On Oct. 24, 1959, he was united in marriage to Jane Oistad at Maria Lutheran Church in Kennedy.
Arnold served in Vietnam and Iceland before being stationed at bases in California, Virginia, Hawaii as well as Duluth and Grand Forks.
In 1977, they settled in Donaldson, Minn., and moved to Kennedy in 1979. Jane passed away on July 24, 1998. Arnold was a member of Maria Lutheran Church, served on the Kennedy City Council and was a volunteer fireman.
Arnold is survived by his children, Nona (Robert) Hultgren, Thief River Falls, Minn.; Joy (Joey) Hauert, Kennedy; Connie (David) Creviston, Badger, Minn.; Kevin (Michelle) Christian, Council Bluffs, Iowa and Jason Christian, Kennedy; 12 grandchildren, Sarah (Nate),  Jessica (John), Christian (Carissa), Josh (Amy), Jordan, Jeremy (Jocelyn), Zachary (Katie), Devin (Kayla), James (Courtney), Sherissa, Tanner and Austin; ten great-grandchildren; and many nieces, nephews and other relatives.
He was preceded in death by his wife, Jane; parents; a brother, Robert; sister, Betty and a great-granddaughter, Jane.
Funeral services were held Saturday, July 6, 2019, at 2 p.m. in Maria Lutheran Church, Kennedy.  Interment was in the Kennedy City Cemetery.  Visitation was held at the church for one hour prior to the service. Special music by Charles and Patti Swanson. Military honors were accorded by the Minnesota National Guard and the Kennedy VFW. Pastor Kathy Levenhagen, presidied.
Thank you to all the family and friends for all the love and support.
We are grateful for your prayers, thoughts and memories.
Austin Funeral Chapel, Hallock, was in charge of the arrangements. www. austinfuneralchapel.com