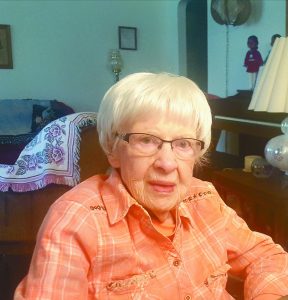 Marjorie Nelson, 96, of Lancaster, Minn., passed away at Kittson Memorial Healthcare Center in Hallock on Sunday, June 9, 2019.
Marjorie Kain was born Nov. 21, 1922, in Pembina, N.D., the daughter of William and Olga (Wilwant) Kain. She moved with her family to Northcote, Minn., at the age of 10 and later settled in Lancaster. As a teenager, Marjorie traveled to Hallock to work during the week and returned home on weekends. With so much time being spent in Hallock she attended high school there, graduating in 1941.  Marjorie worked at the Women’s Shop clothing store in Hallock for several years.
On Nov. 2, 1943, she traveled by train with her fiancé, Gordon Nelson, to Minneapolis and got married there. They returned to Lancaster and farmed there until 1960 when they purchased the local Hardware Hank and operated it until 1988. Gordon passed away on Nov.1, 2012.
Marjorie was a member of Sion Lutheran Church and WELCA. She enjoyed card club, golfing, square dancing and had been a Cub Scout leader.
Marjorie is survived by a son, Todd (Cindy) Nelson, Lancaster; grandchildren, Jeff, Danny, LaVonne, Lance and Luke; nine great-grandchildren; a sister, Bernice Bengtson, Hallock; a brother, Ken Kain, Thief River Falls, Minn.; a half-sister, Marilyn in the Twin Cities and nieces and nephews.
She was preceded in death by her parents; husband; a son, Kurt; and a brother, Earl.
Funeral services were held Friday, June 14, 2019, at 11 a.m. in Sion Lutheran Church, Lancaster. Interment was in Riverview Memorial Garden Cemetery, Lancaster. Visitation was held at the church for one hour prior to the service. Pastor Kathy Levenhagen, presided; Dianne Rice, organist; Don and Kris Thorlacius, duet. Casket bearers were Pat Yutzenka, Judd Nelson, C.J. Peterson, Matt Bengtson, Brent Pearson, Perry Pearson and Mark Wilwant.
Austin Funeral Chapel, Hallock, was in charge of the arrangements. www. austinfuneralchapel.com.