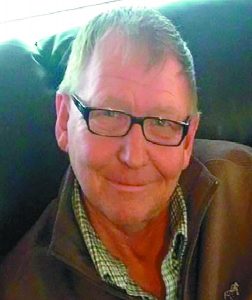 Jeffry Ingeman, 64, of Kennedy, Minn., passed away peacefully at his home on Monday morning, Aug. 19, 2019.
Jeffry Allan Ingeman was born Jan. 26, 1955, in Hallock, Minn., to Roy and Gladys (Bengston) Ingeman. Jeff grew up on the farm north of Kennedy, was baptized and confirmed at Maria and attended school in Kennedy.
Jeff was united in marriage on July 10, 1976, to Pamela Taie in Newfolden, Minn. To this unity three children were born, sons Chad and Ryan, and daughter, Jamie.
Together, along with his brother Brian, they farmed and owned and operated Ingeman Trucking up until his death.
Jeff was a member of Maria Lutheran Church.
Jeff enjoyed farming, trucking,  attending UND and Minnesota Wild hockey games, and auction sales. Jeff also enjoyed working on equipment in his shop, and  being involved in local construction projects.  Jeff also enjoyed Ranger rides with his special friend, Duke. One of his biggest joys in his life was spending time with his children and grandchildren. He was very excited to be a grandfather again this winter.
Jeff is survived by his children, Chad (Lindsay) Ingeman of Park Rapids, Minn.; Ryan (Jacinda) Ingeman, of Grand Forks, N.D., and Jamie (Justin) Osowski of Hallock; grandchildren Lucas and Madison Osowski; brothers, Lyndon of Great Falls, Mont.; Mark (Becky) of Hallock; Steve (Peggy) Karlstad, Minn., and Brian of Kennedy, and many aunts, uncles, nieces, nephews and cousins.
Jeff was preceded in death by his parents, and infant granddaughters, Faith and Gracie Ingeman.
Jeff was a hardworking business owner who could strike up a conversation with anyone who would listen. He will be greatly missed by all who loved him.
Funeral services were held Saturday, Aug. 24, 2019, at 11 a.m. at Maria Lutheran Church, Kennedy.  Interment was at the Kennedy Cemetery. Visitation was held in the church one hour before the service. Pastor Kathy Levenhagen presided. Special music, Galen and Julie Nordin. Casket bearers were Tom Twamley, Clayton Bronson, David Ingeman, Kenny Hultgren, Todd Truedson and Roger Jacobson.
Austin Funeral Chapel, Hallock, was in charge of the arrangement. www.austinfuneralchapel.com