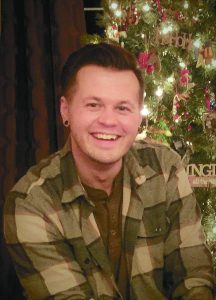 Adam J. Henry, 33, Fargo, N.D., passed away on Saturday, Aug. 24, 2019, at Sanford on Broadway, Fargo.
Adam James Henry was born on Dec. 17, 1985 at Lemoore Naval Hospital in California. Adam grew up in the West Fargo area. After graduating from West Fargo High School in 2004, he continued his education by attending Moorhead State University.
His career began in sales with Journeys, where he moved up to store manager and eventually regional manager. In 2012, Adam had the opportunity to expand Journeys into Canada. While he lived there, not only did he open multiple stores, played the role as Regional Manager, but he found opportunities to explore the incredible wilderness. After earning multiple awards, like National Manager of the Year, he moved on from retail management to the banking industry.
Adam loved music, sports, respectful political discussion and most of all his family. He and Audra had an expansive collection of vinyl they enjoyed together. In high school, he spent years playing soccer and had always enjoyed watching various sports. Adam loved all animals, especially his first pet Kodiak, later Denali and most recently Bernie.
Adam’s favorite memories include spending time with his Mom exploring endless parks and enjoying the outdoors year around. He also spent time at his grandparent’s farmstead and countless hours of fishing at Buffalo Bay on Lake of the Woods. He enjoyed watching his brother, Caleb, grow up and introducing him to new experiences and always played the role of protective and fun big brother. While working in Canada, Adam found a love and connection to the land. It always had a hold on his heart, enough that he completed his tattooed sleeve with a scene from Moraine Lake. And finally on April 28, 2019, Adam and Audra had their wedding to celebrate their love and commitment to each other with their families and the closest of friends.
Adam is survived by his wife, Audra Starke, of Fargo; mother, Carnalee (Mark) Lykken and brother, Caleb of West Fargo; father, Russell Henry, of Saratoga Spring, N.Y.; maternal grandparents,  Iver (Catherine) Cleem, of Hallock, Minn.; uncle Tony (Tammi) Cleem, of Cavalier, N.D.; along with many cousins; Audra’s parents, Clint (Brenda) Starke of Cooperstown, N.D., and her siblings.
Adam was preceded in death by his cousin, Ryan Cleem, his first pet Kodiak, and his most loyal companion Denali.
Memorial services were held Friday, Aug. 30, 2019, at 11 a.m. at West Funeral Home, West Fargo, N.D. with visitation one hour prior to the service.