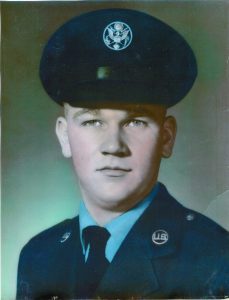 Harvey Strege 81, of Lancaster, Minn., passed away at his home on Aug. 28, 2019.
Harvey was born May 25, 1938, at Orleans, Minn., to Ernest and Elvina (Eickman) Strege. He grew up in Orleans and attended local schools. When Harvey entered his junior year in school he asked his mother if he could join the military; Elvina said yes and Harvey entered the Air Force at age 17. While stationed in Germany he met, fell in love and then married Traudel Veidt on Dec. 13, 1958.
After serving with the Air Force for 21 years, Harvey and Traudel returned to Minnesota and settled in Lancaster. Harvey farmed with his father for several years and worked for Wilwand Farms for 15 years before retiring. He loved farming and working for Wilwands and was especially proud of the tractor and equipment he was able to operate for them.
Diagnosed with lung cancer on Nov. 4, 2017, Harvey, a strong and stubborn man, survived for many months with the disease. Harvey’s grandchildren and greatgrandchildren were his most prized possessions.
He is survived by his daughters, Lois Wilson, Lancaster, Heidi (Bernie) Bjorgaard, Lancaster, and Tammy (Mark) Galey, Talahasse, Fla.; a son, Steven Strege, Hallock; grandchildren, Amanda, Corrie and Heather Strege, Holly Kaltenberg, Cody Wilson, Kyle (Nicole) Wilson, Nick Bjorgaard (Lindsey Quiner), and Danielle (Shane) Martin and Michael Galey (Katie Yates) and their baby daughter arriving in November; brothers, Donnie (Barb) Strege in Bemidji, Minn., Gordy (Becky) Strege, Red Lake Falls, Minn.; and sisters, Janet (Arlen) Nordin, Lancaster, Faye (Randy) Wosick, Manvel, N.D., and Doris (Ron) Otting, Anaheim, Calif.
Harvey was preceded in death by his parents; wife, Traudel; and sons, Johnny and Donald.
Memorial services were held Monday, Sept. 9, 2019, at 11 a.m. in Sion Lutheran Church, Lancaster. Visitation was held at the  church for one hour prior to the service. Tim Peterson and Galen Nordin, presided; Dianne Rice, organist and Galen Nordin, soloist.
Austin Funeral Chapel, Hallock, was in charge of the arrangements. www.austinfuneralchapel.com.