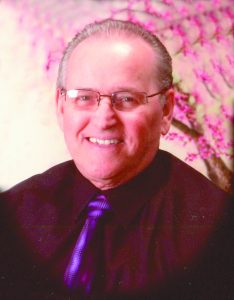 R. Allen Maksymchuk, 73, of Fargo, N.D., died Thursday, Sept. 19, 2019 at the Fargo VA Medical Center.
Robert Allen Maksymchuk was born to John and Elana (Morrison) Maksymchuk in Hallock, Minn., on Nov. 7, 1945. He attended grade school in Caribou Township from first to seventh grade. He attended Lancaster Public School from eighth to 12th grade graduating in 1963. He attended the Area Vo-Tech in Thief River Falls, Minn., from 1963-1965. In December 1965, he was inducted into the US Army and served one year in Cam Ranh Bay Vietnam as a field communications crewman assigned to the 22nd Replacement Battalion. He returned to the U.S. in 1967 and was discharged from the service at Fort Knox, Ky., in December 1967.
On June 22, 1968, he married his high school sweetheart, Geraine Nelson. They made their home near Hallock. In May 1969, Al started employment with PKM Electric Co-op as an apprentice lineman and advanced to sub-foreman and eventually to foreman at the Hallock service center, retiring after 30 years of service in January 2000.
In August 1969, their daughter, Faith, was born. In November 1971, their son, Scott, was born. Al enjoyed watching his children in all their activities and especially their sporting events.
He also enjoyed hunting, fishing and doing woodworking projects.
In 1993, Al was diagnosed with MS. He continued working until his retirement in 2000.
In September 2000, Al and Geraine moved from their rural Hallock home to Moorhead, Minn., where they built a new home. In October 2017, Al and Geraine sold their home in Moorhead and moved to Bethany on 42nd in Fargo, N.D.
Al was a member of the Lancaster Legion Post 214, and a lifetime member of the VFW Post 1223 in Moorhead.
Al is survived by his wife of 51 years, Geraine; two children, Faith (Steve) Asper and Scott (Gina) Maksymchuk; sister, Marie Quirk, Detroit, Mich.; three grandchildren, Espen Asper, Stian Asper, and Abbey Maksymchuk; and several nieces and nephews.
He was preceded in death by his parents; brother, Bill Maksymchuk, Babbitt, MN; and sisters, Jennie Pearson, Lancaster, Minn.; and Dorothy Sveum, Lancaster, Minn.
Funeral services will be held Tuesday, Sept. 24, 2 p.m., at Lancaster Covenant Church, Lancaster, Minn., with visitation one hour prior.
A prayer service will be held Sunday, Sept. 22, 2 p.m. at Hanson-Runsvold Funeral Home, Fargo, ND with a visitation one hour prior.
Burial will be in Riverview Memorial Gardens, Lancaster.
Condolences and memories may be shared at www.hansonrunsvold.com
Arrangements by Hanson-Runsvold Funeral Home – Fargo, N.D.