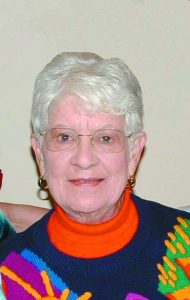 Jeanette Evonne Bockwitz passed away on Sept. 8, 2019, at the Good Samaritan Ambassador Home in Golden Valley, Minn., at the age of 83 years old.
Jeanette was born to parents, Davis and Dorothy Vilen, on April 25, 1936, in Hallock, Minn.. She attended grade school and high school there.
In 1952, she married Rodney Bockwitz from Humboldt, Minn. They had two daughters, Cindi and Cheri. They lived and farmed there until 1965 when they moved to Minneapolis, Minn.
Jeanette worked as a dental assistant and also did so when she moved to Hialeah, Fla., for several years. She returned to Golden Valley, Minn., and worked at Liberty Mutual as an insurance adjuster. She retired at the age of 55. She enjoyed the remainder of her life at her condominium in New Hope, Minn.
Jeanette is survived by her daughters, Cindi Bockwitz from Atlanta, Ga., and Cheri from San Antonio, Texas; her sister, Debbe Duden; her grandson, Jeremy, from San Antonio; nieces, Jill (Duden) Anderson from Vancouver, Wash., and Nichole (Duden) Farley from Zimmerman, Minn.; and grand-nieces, Megan, Kayla and Halle Farley, and grand-nephew, Jacob Duden.
She will be greatly missed by family and friends.