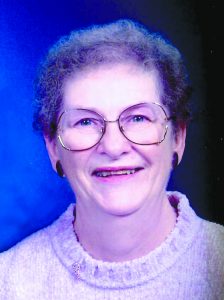 Marilyn “Polly” Swanson, age 84, of Ada, Minn., formally Twin Valley, Minn., died Monday, Oct. 14, 2019, at Benedictine Care Community, Ada.
Marilyn Joan Bratlie was born on Aug. 24, 1935, to Clifford and Myrtle (Johnson) Bratlie near Kennedy, Minn. Following her graduation from Kennedy High School, Polly helped on the farm. She met Charles Swanson when her brother and he served together during the Korean Conflict.
After his honorable discharge, Charlie and Marilyn were united in marriage on June 2, 1956, in Kennedy.The young couple made their home in Kennedy and purchased a local store front with a lunch counter. Charlie worked at the McCabe Elevator while Polly operated the lunch counter.  She thoroughly enjoyed the people at the store, selling ice cream, sandwiches as well as miscellaneous goods.
In 1962, they moved to Twin Valley where they began their family and were blessed with two boys, Brian and Kevin. Charlie managed the Twin Valley Elevator until his retirement in 1994 and over the years, Polly worked part-time doing the bookwork. They continued to make their home in Twin Valley.
Charlie passed away in May of 2007. Polly later moved to the assisted living and most recently has made her home at the Benedictine Care Community.
Although Polly could be stubborn, independent and a bit overprotective, especially of Brian, she always meant well and truly loved helping others. Polly was a soft-spoken woman with a generous heart and a helping hand who frequently volunteered. For many years, she decorated at Valley Pines and helped organize the Silent Suppers.
Polly was a long-time active member at Zion Lutheran Church, helping with the Ladies Aid, Alter Guild and the quilting club.
When their children were younger, they spent many summers at their lake cabin on Tulaby Lake, rural Waubun, Minn. Polly also enjoyed countless hours at Valley Pines with the ladies working on craft projects, quilting and embroidery.
She will be greatly missed by all who knew and loved her.
Marilyn is survived by two sons, Brian Swanson, Ada, and Kevin (Brenda) Swanson, Waubun; one granddaughter, McKaylee Swanson, Moorhead, Minn.; one sister-in-law, Diane Bratlie, Grafton, N.D.; two nieces and one nephew. She was preceded in death by her parents; her husband, Charlie; and two brothers, Kenneth and Curtis.
Funeral services were held on Thursday, Oct. 17, 2019, at 11 a.m. at Zion Lutheran Church, Twin Valley. Visitation was held one hour before the funeral at the church. Burial was in the Zion Lutheran Cemetery, Twin Valley.
Arrangements entrusted to Anderson Family Funeral Home of Twin Valley. Online: www.andersonfamilyfh.com.