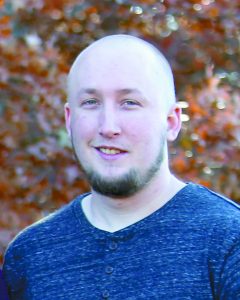 Cody John Shablow, 28 of Akra, N.D. passed away on Wednesday, Oct. 9, 2019.
Cody was born Sept. 17, 1991, in Mesa, Ariz., to Curtis and Kellee (Rowlett) Shablow.
Cody lived the early part of his childhood in Mesa, where he enjoyed skateboarding, swimming and hanging out with his friends and family.
In 2003, the family moved to Cavalier, N.D., where Cody made lots of new friends and enjoyed his freedom to be outdoors; hunting, snowboarding, snowmobiling and just enjoying life. Most recently, Cody was employed with Kelly Bean Company in Cavalier.
Cody is survived by his father and step-mother, Curtis and Janine (Gironda) Shablow of Mesa; his step-brother, sister-in-law and niece – Adam, Rhiannan (Lowe) and Alanna Ferguson of Apache Junction, Ariz.; his half-sister, Jennifer Hawley and her daughters Kayelee, Madysen, and Bella of Ventura, Calif.; grandmother, Laurel (Einarson) Shablow of Hiawatha, Kan.; step-grandparents, John and Joanie (Pick) Gironda of Mesa; his partner, Nicole Rizzi, her sons Ashton and Landon of Akra; and many aunts, uncles and cousins.
Cody’s mother Kellee Shablow, grandfather Jack Shablow, grandfather Larry Rowlett, grandmother Sharon (Gish) Rowlett, step-grandparents Dale and Joan (Ehret) Stutheit; and niece Alexus preceded him in death.
A visitation will be held Friday, Nov. 8, 2019, from 5 to 7 p.m. at the Askew Funeral Home, Cavalier. In lieu of flowers, donations can be made to the American Foundation for Suicide Prevention.
Online guestbook at www.askewfuneralhome.com.