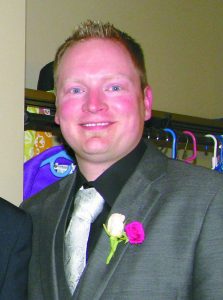 Andrew Thompson, 41, of Hillsboro, N.D., passed away unexpectedly while at work in Amenia, N.D., on Monday, Feb. 10, 2020.
Andrew Robert Thompson was born on Sept. 28, 1978, to Robert and Catherine (Britten) Thompson. He was dedicated on Dec. 24, 1978, at the Assembly of God Church in Karlstad, Minn. He was also baptized in Karlstad. He attended the majority of his school years at Heritage Christian School in Karlstad and graduated from Tri-County High School in 1997.
In the years during and after college, Andrew worked for the following: Justin Dagen Farm, Karlstad, custom mowing for Jim Sundby and Jeff Gryskiewicz, Stephen, Minn., Dell Arneson Inc., Hillsboro, N.D., Ellingson Drain Tile, Harwood, N.D. and O’Brien Elevator in Mayville, N.D.
At the time of his death he was working for Taft Elevator in Hillsboro and Amenia. To know Andrew, was to love him. That part was inevitable. Whether it was his ear-to-ear grin, contagious laugh or his easy-going nature – when you met him, you knew he was a keeper. Truly, one of a kind. He could make you laugh until you thought your side would split. He had an incredibly big heart that he wore on his sleeve with pride every day of his life. To say he was the kind of man that would give you the shirt off his back if you needed it would be an understatement. He would have given anything, to anyone, at any time. Andrew knew how to love without limits and to live life to the fullest. Most treasured of all were the lazy lake days with his kids, soaking up hours of campfire stories, s’mores and snuggles. He loved to be a part of community and his family of friends was always growing. His love for basketball grew into a love he shared with his son, Isaac, as he coached the Hillsboro boys’ basketball team alongside Pastor Joe. He was a farm boy, through and through. Never afraid to get a little dirt of those hands and break a sweat to get the job done. He took pride in everything he did, but he took the most pride in his children who were his whole world.
Andrew is survived by his parents, Robert and Catherine Thompson of Strandquist, Minn.; sister, Lisa (Thompson) Leach and her husband, Garrett and daughter, Emma of Franklin, Tenn.; children, Isaac (age 13), Amelia and Ava (age 10) of Hillsboro; aunts, uncles, cousins, extended family and friends.
He is preceded in death by his sister, Amy Beth; grandparents, Isaac and Betsy Thompson, Earl and Marguiret Britten; cousin, Christopher Britten; aunts and uncles.
Funeral services were held Sunday, Feb. 16, 2020, at 2 p.m. in Our Savior’s Lutheran Church in Hillsboro.  Visitation was held on Saturday evening from 5 to 7 p.m. in Austin Funeral Chapel at Hallock, Minn., with a prayer service at 6 p.m. and at the church for one hour prior to the service on Sunday.
Austin Funeral Chapel was in charge of the arrangements. www.austinfuneralchapel.com.