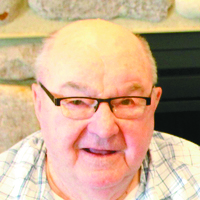 James “Jim” Fredrick Locken, 80, passed away on Feb. 14, 2020, at Altru Hopsital, Grand Forks, N.D.
Jim was born on June 8, 1939, in Lancaster, Minn. to the late Fredrick and Anna (Oliver) Locken. He was baptized in the Lutheran faith and attended North Star Country School near Lancaster from 1945 to 1949 and then the Lancaster school where he graduated.
Following graduation, Jim enlisted in the Army where he served two years in Germany until his discharge. He then moved and worked in Minneapolis where he met Adeline Roy. He and Adeline were united in marriage on June 22, 1963, at Eidsvold Luthern Church in Halma, Minn., and the two continued to make their home in Minneapolis until moving to Lancaster in 1969.
After a year they then moved to Halma and Jim was employed with Arctic Cat in Thief River Falls. He and Adeline purchased their farm in Lancaster in 1975. Jim worked for a number of campaigns at the American Crystal Sugar factory in Drayton, N.D.
Jim and Adeline moved to Elderbush Manor in Greenbush in 2010. Adeline moved to LifeCare Greenbush Manor in 2014 and Jim never missed a day visiting her. Jim joined her in 2016 where he continued to make his home until his passing at the age of 80 years, 8 months and 5 days.
Jim was a past member of the American Legion Post in Lake Bronson and a current member of the American Legion Post in Lancaster.
He enjoyed farming, gardening, driving around looking for deer and playing bingo. He enjoyed all of the LifeCare activities and time at the Greenbush Race Park. His greatest joy was spending time with his family, he never missed any of his grandchildren’s activities.
He is survived by his wife, Adeline, of Greenbush; his daughter, Shannon (Richard) Mortenson of Kennedy, Minn.; his son, Jeff (Anita) Locken of Strathcona, Minn.; grandchildren, Paige (fiancé Mike Niehoff) Mortenson of Monticello, Minn., J.P. Mortenson of Omaha, Neb., Josee and Tristan Locken of Strathcona; one brother, Robert (Rogene) Locken of Omaha, Neb.; four sisters, Joanne Quiner of Hallock, Carol (Arlie) Peterson of Newfolden, Karen (Bill) Klava of Grand Forks, Debbie (Rick) Bobinchak of Sheridan, W.Y.; sister-in-law, Doris Roy of Grand Forks; brother-in-law, Larry (Ruby) Roy of Minto, N.D; along with many nieces, nephews and other relatives.
Jim was preceded in death by his parents; mother-in-law, Helen Roy; brother-in-law, Bob Roy.
A memorial service was held at 2 p.m., Sunday, Feb. 23, 2020, at Collins Funeral Chapel in Greenbush with Pastor Curt Johnson presiding. Visitation was held one hour prior to services.
Military honors were accorded by the Lancaster American Legion.
Collins Funeral Home, Greenbush, was in charge of the arrangements.