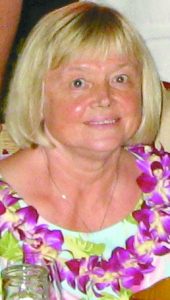 After a prolonged illness, Judy Reese, 74, of Grand Forks, N.D., died Wednesday, March 25, 2020, at her home, surrounded by her family.
Judith Ann Christensen, the daughter of Roy and Verna (Vilen) Christensen, was born on Sept. 6, 1945, at Hallock, Minn.  Judy attended school at Lancaster, Minn., and graduated from Lancaster High School in 1963.  She attended nursing school at Crookston, Minn., from 1963-1965, where she became an LPN.
Judy married John H. “Jack” Reese on Oct. 24, 1964. They were married for 55 years and had four children, Jason Thane, Cheri Annette, Jessica Erin and Cassidi Ann.
She was employed from 1965-1967 as an LPN at Deaconess Hospital in Grand Forks. From 1968-2011, Judy and Jack owned and operated several flower shops, The Flower Shop in Hallock, Kona Flower Shop in Kailua Kona, Hawaii, and The Rose Flower Shop in Grand Forks.
Judy had many interests throughout her life and especially enjoyed making others happy through making things beautiful. Her keen eye for design and decorating were evident in the many years she spent as a florist, especially during the annual Christmas Open Houses at The Flower Shop for which she also baked hundreds of cookies. She was a consummate hostess and always pulled out all the stops for gatherings, whether it was a traditional luau, fondue party, Christmas or Easter Sunday. Her gardens brought her so much joy and were admired by many. She was the family historian and took copious amounts of photos that documented every family vacation and rite of passage. She also enjoyed traveling, especially to Medora, Hawaii, California and Annapolis. Most recently, she loved Arizona in the spring when the dessert was in full bloom.
Judy had many pets over the years, and she loved them all, including her cats Chad, Tiny, Happy, Tu, Baby, Wylee and Sam, and especially her beloved chow-chow, Puppy Bear.
Judy volunteered as a Sunday school teacher and Pioneer Girls instructor at Grace Lutheran Church in Hallock, and with Youth With A Mission in Hawaii.  She was also one of the leaders of the 1970s youth group, The Good News Generation Singers in Hallock.
Judy is survived by her husband, Jack Reese, of Grand Forks; daughters, Cheri, Kennedy, Minn.; Jessica, Fargo, N.D.; and Cassidi, Ridgecrest, Calif.; her mother, Verna, Hallock; grandchildren, Alison, Taylor, Scott, Katie, Jocelyn, and Janessa; siblings, David Christensen, Coon Rapids, Minn.; Lee Christensen, Lancaster; and Faith Masloski, Cottage Grove, Minn.
She was preceded in death by her father, Roy;  a son, Jason Thane; and a brother, Charles Christensen.
Flowers may be sent to Jack Reese, via All Seasons Garden Center, 701-746-7777 or Cheri Reese, via Farm Town Floral, 218-843-2848.
Per her wishes, Judy’s remains were donated to the medical school at the University of North Dakota. The family is planning a summer memorial service.
Amundson Funeral Home in Grand Forks is in charge of arrangements.   Online guestbook is available at www.amundsonfuneralhome.com