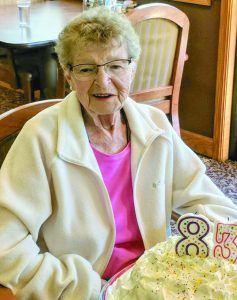 Marvella “Judy” E. Krabbenhoft, 83, of Blackduck, Minn., died Tuesday, May 26, 2020, at the Good Samaritan Society, Senior Living, Blackduck.
Judy was born on June 12, 1936, in Kennedy, Minn., to Robert and Ellen (Bjornberg) Gunnarson.  She attended a country school in Jupiter Township and graduated from Kennedy High School in 1954.  She attended a business trade school for a few years.  She owned and operated KR Kitchen and Bath Center, which manufactured and sold cultured vanity tops in Fargo from 1973-1979. She owned and operated the Funkley Bar from 1980 to 1985 and was the Mayor of Funkley for a couple of years.  She then went to work for Anderson Fabrics in 1985, retiring in 2010.
Judy was the church organist at Holy Trinity Lutheran Church in Blackduck for many years and enjoyed her time spent at the Blackduck Senior Center after retirement.  Judy loved playing board games, marbles, Scrabble and playing cards, especially race horse. She also enjoyed flower gardening, playing the piano and going to family events.
Judy is survived by her sons, Jim (Liz) Krabbenhoft, Jr., of Blackduck, and John (Jenny) Krabbenhoft of North Saint Paul, Minn.; her daughter, Jane (Rudy) Patch of Blackduck; 3 granddaughters, Jody, Isabella and Hayley; eight grandsons, Lucas, Jacob, Kelby, Nick, Steve, Logan, Riese and Carson; several great-grandchildren; and numerous nieces and nephews.
Judy is preceded in death by her parents, Robert and Ellen; three brothers, Lloyd, Glen and Virgil Gunnarson; two sisters, Bernice Vik and Mardy Vik; a grandson, Aaron Krabbenhoft; a niece, Patricia Anderson, and numerous aunts and uncles.
A visitation was held from 5- 8 p.m. on Thursday, June 4, 2020 at the Cease Family Funeral Home in Blackduck.  Due to the pandemic and public health concerns, a private funeral was held on Friday, June 5, at the Holy Trinity Lutheran Church in Blackduck with Rev. James Sorensen officiating. Interment will be in Lakeview Cemetery, Blackduck.
Messages of condolence may be sent to ceasefuneralhome.com.