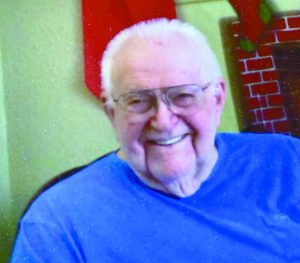 Roger Lundberg, age 96, died Jan. 30, 2020, at the  Kittson Memorial Nursing Home in Hallock, Minn.
Roger was born on April 22, 1923, on the family farm 6 miles northwest of Kennedy, Minn., to  Gottfred and Betsy Lundberg. He was the seventh of nine children. No hospital for him as he was born in the house in Skane township.
Roger attended the  Dahlgren School, which was a half a mile from the family farm, until eighth grade and then went to the Northwest School of Agriculture in Crookston, Minn., to complete his freshman year. Roger took a year off of school in 1939 to work on the family farm and the next year attended  Kennedy High School for the 10th and 11th grades, graduating in 1942.
Roger married Clarice Johnson on June 2, 1946, and together farmed and raised their six children. Roger took over the family farm in the late 1940s and formed a farming partnership with his brother, David, when he returned from the Korean War. In 1970, his son Danny, and in 1973, his son Glen, joined the family partnership for the Lundberg Brothers and Sons.
Roger served on the Kennedy Public School Board for 25 years, the Farmer’s Elevator Board, Skane Township Board, and the Red River Lutheran Church Board in which he was a member.
Roger retired in 1985 and left for Yuma, Ariz., before fall work was completed. The weather proved to be wet, miserable, compared to no other previous fall in which Danny and Glen had to give it a go of combining after freeze-up. Roger couldn’t figure out what was taking them so long while enjoying the hot dry heat and noodling around the pool.
In retirement, Roger sold real estate in Yuma and enjoyed every year of retirement there but never fell short of giving farming advice. He spent most of his retirement years in Yuma  traveling back to  Baudette, Minn., in the summer months.
He married Pauline in 1987 and spent 18 years together until her passing in 2005.
In 2015, Roger relocated to assisted  living in Hallock. He never did give up hope in returning to Araby Acres in Yuma to his family and friends there, his golf cart and his life at the pool.
We would like to thank all the staff at the Kittson Memorial Nursing home for their wonderful care. As dad would say, “No, no, that’s good enough.”
He was preceded in death by his parents Gottfred and Betsy Lundberg; Pauline (wife), Clarice (1st wife and mother of his children); eight sisters and brothers: Vivian, Mae, Violet, Garwin, Doreen, Jeanne, Ruth and David; grandson, Sam.
He is survived by his six children: Daniel (Nancy), Glen (Mary), Kathleen (Francis), Thomas (Mary Lou), Jane (Patrick), and Ellen Kay; 12 grandchildren; seven great-grandchildren;  sister-in-law, Beverly; a multitude of endearing nieces and nephews; and many beloved members of his wife, Pauline’s family:  her daughter, Pam and husband, Doug Melon; son, Brent and wife, Rhonda Simons, grandchildren and great-grandchildren.
Outside gravesite service at the Red River Lutheran Cemetery will be on Friday, June 19, 2020, at 5 p.m. for nearby family and friends.
Please follow CDC guidelines and practice social distancing.
Austin Funeral Chapel, Hallock, is in charge of the arrangements.