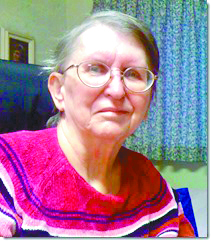 Judith “Judy” H. Dunn, 75, of Hayfield, Minn., passed away at Field Crest Care Center in Hayfield on Friday, June 19, 2020, after a 54 year-long battle with multiple sclerosis.
Judy was born June 14, 1945, in Fosston, Minn., to Herman and Della (Thompson) Simonson. She was a 1963 graduate of McIntosh High School and went on to vocational school in Thief River Falls for secretarial studies. Throughout her career, Judy worked for Peavey Feed & Seed Co., Boeing, Sioux Line Railroad, and the University of Minnesota Hospital in the billing dept. Specifically, after graduating from vo-tech, she moved to Seattle where she worked for Boeing as a clerical worker. When she moved back to Minnesota in 1966, she drove home in her prized 1954 Chevy that she purchased herself. Being cautious for her safety as a young woman traveling alone, Judy put a cowboy hat in the back window of her Chevy so others would think a man was traveling with her. After moving back to Minneapolis, Judy met and married Joel Dunn. They were married from 1968 until 1987. While married, the couple farmed in Hallock, Minn., and welcomed two daughters, Heather and Holly.
As recalled by close family, when Heather was born, there was unlimited admiration of the new baby, comfort in a new home, and the life ahead. The support of Judy’s mom was so helpful to Judy as she gained confidence in her new role as a Mom. It was a role she took seriously. When Holly was born, the joy and pride continued. She loved the honor of twice having the county’s first baby of the year. She loved to sing with and to her girls, making sure they got to nursery school, and seeing that they had opportunities to learn and have fun.
In 1979, Judy gave her life to Christ. Judy’s faith was very important to her, which she shared with her daughters and other children, as a Sunday school teacher.
She had a passion for music, especially the Beatles and Johnny Mathis, of which she was a member of the first fan club. She loved musicals such as “West Side Story” and “The Sound of Music.” In the early 60s, when “West Side Story” first came out, Judy was determined to see it. She made arrangements with her friends to go to the theater in Fosston. It was cold and snowy in the middle of winter. She didn’t have permission to go, but she went anyway. Had she taken the roads, she would have walked four miles, but she took a shortcut across the fields and made it in time for the show.
As Judy’s deteriorating health started to gain momentum in her 40s, it became clear that she would need extended help and supervision. So, at the very young age of 47, she moved into a nursing home. She would ultimately reside in long term care facilities for 28 years, the last 10 years at Field Crest Care Center. The family would like to extend a sincere thank you to her Field Crest family who cared for and loved her for so many years.
Judy is survived by her two daughters, Heather Mundy of Kasson, Minn., Holly (Tony) Dunn of Saint Louis Park, Minn.; grandchildren, Katelyn Wright of Bemidji, Minn., and Caleb Wright and Breanna Mundy, Kasson, Minn.; brothers, Richard (Kathy) Simonson of Elk River, Minn., Dale Simonson of Saint Cloud, Minn.; sisters, Pat (Ray) Schleicher of Falls Church, Va., and Gerri (Floyd) Gilman of New Brighton, Minn.
She was preceded in death by her parents; son-in-law, Tyler Mundy; and brother-in-law, Al Larvick.
A celebration of Judy’s life was held at 3 p.m. Monday, June 22, 2020, at Community Celebration Church, Kasson, Minn., with Pastor Steve Larson officiating. Visitation was held from 1 p.m. until time of services on Monday at the church. Interment will be held Wednesday, June 24, 2020, 1 p.m., at St. John’s Cemetery, McIntosh, Minn. Blessed be her memory.
Czaplewski Family Funeral Homes in Kasson, 801 7th St. SE is honored to be serving the Judy Dunn family; to share a special memory or condolence, visit www.czaplewskifh@frontiernet.net.