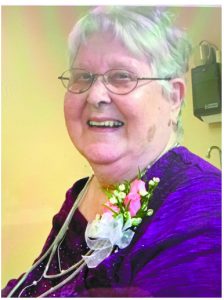 A mother’s hug lasts long after she lets go. With loving memory; Doris Joan Carlson peacefully slipped away from this life into the arms of our loving, heavenly Father on May 30, 2020, in Fargo, N.D., at the age of 92.
Doris was born on Feb. 27, 1928, to Peter and Alice (Palmquist) Nordin. She grew up on a farm south of Lancaster, Minn. She was baptized and confirmed in the Lutheran faith. She was a life-long member of Sion Lutheran Church, Lancaster.  Some of the summer church services and picnics were held at the farm she grew up on.
Her early years were spent in a small country school in Hazelton Township where she walked across a field with her lunch pail to school. Later she attended and graduated from Lancaster High School on May 29, 1946.
As a child, Doris played piano by ear. She enjoyed helping her mother with daily chores and as an only child, enjoyed hunting and trapping with her father; earning the name of Powerful Katrinka!
Doris had an unending kindness and generosity with a neverending smile and laugh. She was always good at accepting people and situations for who and what they were, with never a complaint. With a calm and positive demeanor, she was always content with her life and anything that happened around her. She truly enjoyed the simple things in life. She was a hard working farm wife and loving mother. Through her we knew what resilience and perseverance truly was. She always had large gardens with lots of canning and freezing. All the birthday parties had her white cake with homemade lemon filling and white frosting. She enjoyed taking pictures, bird watching, drives in the country, listening to and watching her grandchildren and great-grandchildren. She enjoyed the busyness of it all.
Doris and Harley enjoyed traveling with the most enjoyable being Sweden and Norway. She loved all animals. She was known for her buns, bread, caramel rolls, donuts, homemade ice cream and every holiday had to have three to four kinds of meat. The weather was a ritual through the years of charting daily the highs and lows of the day and any other important weather information. Sundays always had polka music on the radio in the kitchen. She now is enjoying the riches of heaven as she leaves behind family and friends that she touched along the way.
Left to mourn her passing are family members: a son, Richard of West Fargo, N.D.; two daughters, Marcia (Scott) of Warroad, Minn., and Debbie of Horace, N.D.; five grandchildren, Carmie (Chris) Storey of Faribault, Minn., Kent (Sindy) Larson, East Grand Forks, Minn., Mark (Nikki) Larson, Lancaster, Casey (Tiffany) Larson of Warroad, and Jessica Simons of Plano, Texas; 13 great-grandchildren, CeCe, Maizee, Griff, Thor, Joe, Owen, Kiah, Harley, Haaken, Swede, Otto, Joel and Stella.
Doris was preceded in death by: her husband, Harley; parents, Peter and Alice Nordin; in-laws, William and Hilda Carlson; grandparents, John and Carrie Nordin and Ole and Kristina Palmquist.
The family would like to thank you all for your kind expressions of sympathy.
Funeral services will be held at Sion Lutheran Church in Lancaster on Saturday, July 18, 2020, at 1 p.m. Interment will be in Riverview Memorial Garden Cemetery, Lancaster. Visitation will be held for one hour prior to the service. CDC guidelines with social distancing will be followed.
Austin Funeral Chapel, Hallock, is in charge of the arrangments. www.austinfuneralchapel.com.