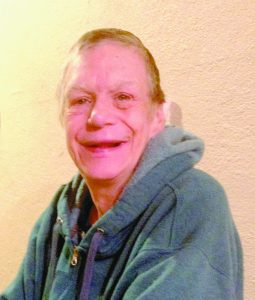 Robert Terry Cozzen, 64, of Lake Bronson, Minn., passed away at Karlstad Senior Living on Aug. 29, 2020.
Robert Terry Cozzen was born on Jan. 6, 1956, to Starkey and Peggy Cozzen in Inglewood, Calif. Robert later moved back to Texas where he spent many long and fun days growing up under the watchful and caring eyes of his big brother, Eddie. Very quickly the whole town knew who the loving child, Robert, was and all became a large part of his family and his protective community.
Lake Bronson became Robert’s home later in his life. The same amazing phenomenon happened here. Everyone soon knew who Robert was and he knew them and remembered everyone’s name after just one meeting. Robert’s love was infectious and touched everyone that was a part of his life.
While living in Lake Bronson the DAC became a large part of his daily life. Robert loved school and the work he did there, his favorite – crushing cans. But by far it was his friends that he was able to see that made him happy to go.
Robert’s last two years were spent at the Karlstad Senior Living. Here his friend circle grew even larger with the care from the staff and his new friends living there.
Robert’s family extended far and wide and so was his love.
Robert is survived by: his brother, Eddie (Jimann) Cozzen of Lake Bronson; sister, Carolyn of La Mesa, Texas; and brother, Kyle Roser, Virginia; his nephews and nieces; Jeremy (Christine) Jones, Jandi (Jedd) Von Ende, Jimmy (Jenni) Jones, Eddie Cozzen and Stephanie Cozzen.
Robert was proceeded in death by: his parents, Starkey and Billie Cozzen and Peggy and Jim Roser; and his siblings, April, Wendy, and Terry.
Graveside services for Robert were held on Monday, Sept. 7, 2020, 11 a.m. at the Riverside Cemetery, Lake Bronson. Pastor Galen Nordin, presided.
Austin Funeral Chapel, Hallock, was in charge of the arrangements.