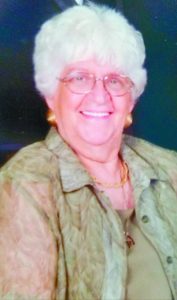 Lyla Lu Karen (Nordling) Ahumada passed away on Thursday, Sept. 17, 2020, at Fayetteville, N.C.
She was born on Oct. 11, 1931, in Hallock, Minn., to parents Carl and Christine Nordling. Lyla grew up on a farm, attended rural school and graduated from Hallock High School in 1949.
She worked at the Kittson County Courthouse for some time before moving to Chula Vista, Calif. While working in that area, she met Felipe (Phil) Ahumada, a young Army soldier. They were married Sept. 4, 1954.
Shortly thereafter, the young couple moved to Fort Bragg, N.C., where Phil was stationed. Sons, Nick and later Steven were born. The family moved to Okinawa, Japan, where Phil was assigned. Son Anthony was born while living there. They returned to Fort Bragg and built a home in Fayetteville. Twins, Patrick and Karen, were born. Several years later Phil retired and they made Fayetteville their home.
Lyla was a devoted and loving wife for 66 years. She was a kind, loving and caring mother, a doting grandmother and great-grandmother, a wonderful daughter, a fantastic sister, a special aunt to her many nieces and nephews and a close friend to her cousins.
Lyla possessed many gifts, talents and qualities. She had creative writing skills, was artistic, spirited and determined. She had a keen mind and a remarkable memory. She was an excellent cook and baker. Lyla had a wonderful sense of humor, a passion for reading, a flair for decorating and a sense of good fashion. She enjoyed music and loved to dance. Lyla was an avid Minnesota Vikings fan, and was very proud of her Scandinavian heritage. She had an outgoing, fun-loving personality and enjoyed a wide circle of friends. It was always a joy to be in her company.
Lyla is survived by her husband, Phil; her children and their spouses, Nick (Lara) Ahumada, Steve Ahumada, Anthony (Vickie) Ahumada, Karen Ahumada and Patrick Ahumada; grandchildren, Kate (Kolin) Vazzoler, Hart Ahumada, Patton (Maggie) Ahumada; great-grandchildren, Goldie Ahumada and Ennio Vazzoler; sister, Bonnie (Don) Pederson; and several nieces, nephews and cousins.
Lyla was preceded in death by her parents, Carl and Christine Nordling; brothers, William (Bill), Leslie and Dennis Nordling; sisters, Arlene Peterson; sisters-in-law, Pauline Nordling Mullens, Virginia Nordling Pearson, Shirley Ann Nordling; and brother-in-law, Harold Peterson; nephews, Charles and Mark Nordling; niece, Laura Nordling; and several aunts, uncles and cousins.
Her family was her source of pride and joy. They meant the world to her. Lyla will be greatly missed by all who knew her and her spirit and love will live on in our hearts.
She possessed a deep, quiet faith in God which was a great comfort to her. Rest well, servant of God.
“To live in hearts we leave behind is not to die.” Thomas Campbell
Funeral mass will be held Saturday, Oct. 3, 1 p.m. at St. Patrick’s Catholic Church, Fayetteville.