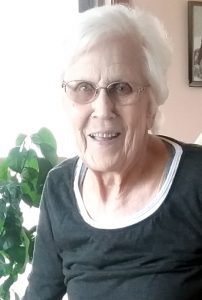 Rosemary (Willenbring) Cooney, a long-time resident of Park Rapids, Minn., and more recently of Kennedy, Minn., died peacefully at home on Oct. 3, 2020, at the age of 93.
A Catholic funeral service will be held outside, at St. Mary’s Cemetery in Two Inlets, Minn., on Saturday, Oct. 10, at 1 p.m. Visitation is scheduled from 11 a.m. to 12:30 p.m., on Saturday, at Jones-Pearson Funeral Home in Park Rapids. (Due to COVID-19, masks are required at both locations.)
Rosemary (Rose) was born on March 27, 1927, in Richmond, Minn., to Mary (Boeckermann) and Frank Willenbring. Her family moved to Two Inlets, when she was a child. She attended a one-room schoolhouse in Two Inlets, where she sometimes was the only student in her class. She went on to two years of high school in Park Rapids and two years in Detroit Lakes, graduating in 1945.
On May 7, 1949, Rose married James Cooney in Two Inlets. Because of Jim’s “Irish wanderlust,” she lived in a number of places over the years, among them, Hallock, Minn., from 1957 to 1974; Wahpeton, N.D., from 1974 to 1989; and Park Rapids, from 1989 to 2018. Along the way, Rose gave birth to eight children, instilling in them a strong work ethic and modeling for them self-reliance and perseverance.
Rose possessed a love for numbers and was a bookkeeper much of her adult life, working primarily in the Hallock city clerk’s office and the Wahpeton Health Care Center. After she and Jim retired to Park Rapids in 1989, Rose volunteered at the elementary school, with the local Hospice program, and at St. Peter’s Catholic Church.
When at home, Rose enjoyed jigsaw and crossword puzzles, gardening, sewing, walking and playing whist. She also traveled a fair amount. Early on, she and Jim took their kids on summer road trips. Later, the two of them crisscrossed the country, from California to Alaska and from Missouri to New York, visiting their grown children and their growing number of grandchildren.
In 2018, Rose moved to Kennedy to be closer to family. After the move, she got reacquainted with old friends, made some new friends and again became a member of St. Patrick’s Catholic Church in Hallock.
Rose lived on her own until her death, as was her fervent wish. She is survived by seven children: Patricia (Bruce) Oldaker, of Jennerstown, Pa.; Tom, of Shevlin, Minn.; Mary (Gary Bostad), of Kennedy; Jeanne (Myron Hennen), of Hallock; Joe (Celia), of Glendora, Calif.; Teresa (Adam Bickford), of Denver, Colo.; and Geri (Steve) Scholl, of Palm Desert, Calif.; one brother, Tim (Marilyn) Willenbring, of Ponsford, Minn.; 12 grandchildren and six great-grandchildren.
She was preceded in death by her husband, Jim; a daughter, Kathleen; a granddaughter, Melissa Hennen; brothers, Walter and Raymond; and sisters, Alice Woeste and Esther Willenbring.
Ten days before her death, Rose suffered a life-threatening stroke. Upon recovery, she said, “I knocked on Heaven’s door, but no one answered.” A few days later, after visiting with all of her family, she knocked again, and this time, she was invited in.
Arrangements by Jones-Pearson Funeral Home of Park Rapids.