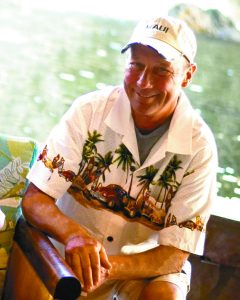 Darryl Younggren, a lifelong Hallock area farmer, passed away on Friday, Nov. 20, 2020, at home surrounded by family.
Darryl was born to Larry and Rose (Layhon) Younggren on Aug. 1, 1961, in Grand Forks, N.D. He graduated from Hallock High School in 1979 and attended NDSU before coming home to farm with his father, uncle and brother.
Darryl was well known for his work ethic and dedication to the family farm. After work, he enjoyed hunting, fishing and competing in hockey, golf and curling. His teammates and opposition remember him as one of the toughest competitors around but always great fun to play with. He competed in high school hockey and golf, and was named rookie of the year in his first season with the Hallock Bruins hockey team. His greatest sports successes came in curling, for which he was well known throughout the region. He competed twice at the U.S. Mixed National Tournament as a skip, once representing Minnesota and once representing North Dakota. His North Dakota team placed third in the nation in 2002.
Darryl also enjoyed volunteering his time in various local organizations; he served as a youth and varsity hockey coach, on the Hallock Co-op Elevator board, and was a past president of both the Hallock Eagles Club and the Hallock Curling Club. He was proudest of the time he spent on the Hallock Volunteer Fire Department where he served for 20 years, several of those as lieutenant.
Darryl is survived by: his two sons, Corey (Amanda) Younggren of Hallock and Connor Younggren of Fergus Falls, Minn.; one grandson, Lawrence, of Hallock; brother and lifelong business partner, Dan (Diane) Younggren; and sister, Diane Younggren, both of Hallock; niece, Kailey of Moorhead, Minn., and nephew, Blair of Hallock; and countless cousins and friends.
He was preceded in death by his parents, Larry and Rose Younggren of Hallock.
Due to COVID restrictions, family and close friends will celebrate Darryl’s life on Wednesday, Nov. 25, 2020, at 11 a.m. in the Hallock Presbyterian Church. Visitation will be held at the church on Wednesday for one hour prior to the service.  Interment will be in Greenwood Cemetery, Hallock. Rev. Marge Landwehr, presiding; Kristi Morrison, organist.
In lieu of flowers, memorials are preferred to the Hallock Curling Club.
Austin Funeral Chapel, Hallock, is in charge of the arrangements. www.austinfuneralchapel.com