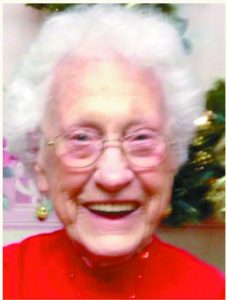 Shirley E. Farbo, 94, of Hallock, Minn., passed away Monday, Dec. 14, 2020, at Kittson Memorial Nursing Home in Hallock.
Shirley Farbo, the daughter of Laura and Herbert Clinton, was born Sept. 11, 1926, in St. Vincent Township. Shirley attended the Lindquist country school in McKinley Township. Shirley married Herman Farbo and they had three children: Barbara (Kenneth) Nordine, Bobby (Joanie) Farbo and Betty (Thomas) Elliot.
Shirley worked in many areas as a waitress, cook and volunteer. She was a member of the American Legion. Shirley really enjoyed traveling and lived life to the fullest. Shirley loved to garden, plant flowers, quilt, do embroidery and sew.
Shirley is survived by: her two daughters, Barbara and Betty; five grandchildren; nine great-grandchildren; and six great-great-grandchildren. She had numerous nieces and nephews she loved dearly as well.
Shirley was the oldest of six children. She was preceded in death by: her parents, Herbert and Laura; husband, Herman; son, Bobby; brothers, Raymond, Collins and Earl; her sister, Bernice; and infant sister, Viola.
A celebration of life will be held at a later date when everyone can get together and do what Shirley loved best – to eat, drink coffee, visit, laugh, share stories and play games.
Austin Funeral Home, Hallock, was in charge of the arrangements. www austinfuneralhome.com