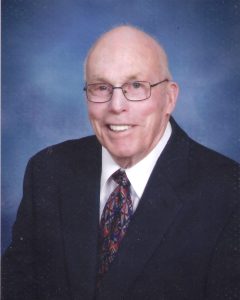 Peter Murray Sinclair was born on Sept. 28, 1932, in Warren, Minn., the second child of Gertrude (Bloomfield) and Donald Sinclair.
Peter spent his entire life in the community of Stephen, Minn., graduating from Stephen High School in 1950.
After graduation, Peter joined the U.S. Army and was stationed in Korea.  Upon his honorable discharge from the service, he attend the University of Minnesota and the University of North Dakota, where he graduated with a degree in business in May 1958.
Peter met the love of his life, Delores Larson, at a dance in Fertile, Minn. They were married in Barnesville, Minn., on June 9, 1957. Following graduation from the University of North Dakota, Peter and Delores returned to Stephen and in 1960 moved to the family farm east of town where they raised their four daughters.
Peter was very active in the community. He was a charter member of the Stephen Lions Club and the Stephen Curling Club, belonged to the Masonic Lodge, the Riverside Golf Course, was a member of the First Lutheran Church, and served on the Stephen School Board, the American Crystal Board of Directors and on the board of the Farmer’s Elevator in Stephen. Through all of these activities, Peter and Delores made many wonderful friends, including friends from all over the Midwest whom they met over the course of their 25-plus years wintering in Bullhead City, Ariz.
Peter was a life-long supporter of the Stephen Tigers, the Stephen-Argyle Storm and the University of North Dakota, and truly, everything Stephen!  He was a loyal fan to every Minnesota sports team, being a lover of all sports, he cultivated that love in his daughters.
Peter loved spending time with his family and was very happy when sons-in-law and grandsons started joining the group. Peter and his brother, Jim, were instrumental in establishing The Sinclair Cup, the annual family golf tournament where the Canadian and American relatives gather for a weekend of golf and companionship.  Whether we were out golfing, fishing, curling, playing pinochle or cribbage – we always enjoyed our time together. Peter never lost his sense of humor and he may have shared a joke or two with you.
Peter moved into the Tamarac Senior Living facility in September 2017 and then to Kittson Healthcare on Jan. 3, 2019.  Peter passed away peacefully at Kittson Healthcare, Hallock, Minn., on Saturday, Jan. 2, 2021.
Left to mourn his passing are: his daughters, Cynthia (Keith) Urbaniak, Kennedy, Minn., Allison (Michael) Peyton, Grand Forks, N.D., Jane (Douglas) Schindele, Stephen, Heather (David) Betters, Rosemount, Minn.; as well as 10 grandchildren: Jacalyn (Nathan) Satterlund, Jason (Katie) Urbaniak, Andrew Urbaniak, Nicholas (Bree) Schindele, Jordan (Chelsea) Schindele, Evan (Autumn) Schindele, Ryan (Sophie) Peyton, Hannah, Olivia and Joy Betters; and 13 great-grandchildren. Peter is also survived by his brother, James (Sharon) Sinclair of Detroit Lakes, Minn., and his brother-in-law, LeRoy Larson, Burnsville, Minn., along with many beloved nieces and nephews.
Peter was preceded in death by: his wife, Delores on June 3, 2011; his parents, Donald and Gertrude Sinclair; a sister, Iris Sinclair Myhre, and her husband, Earl Myhre.
The family would like to thank the Tamarac Senior Living Center, the Kittson Healthcare staff and the community of Stephen who cared for him and brought him many happy moments throughout his life.
Funeral services were set for Saturday, Jan. 9, 2021, at 2 p.m. in First Lutheran Church, Stephen. A public visitation was held at the church from 12 until 2 p.m. Committal services and military honors were held at 2:45 p.m. in the Stephen City Cemetery and all are welcome to attend. Rev. Michael Schendel, presiding. Special music will be provided by the Roland Sisters, Renee Jensen, accompanist. Casket bearers will be Pete’s grandchildren. Honorary casket bearers will be family friends.
CDC recommendations will be followed. Masks are required.
Condolences may be directed to the family in care of Cindy Urbaniak, P.O. Box 132, Kennedy, MN, 56733. The family will direct memorials in honor of Peter’s favorite causes and community services in Stephen. Austin Funeral Chapel, Stephen.