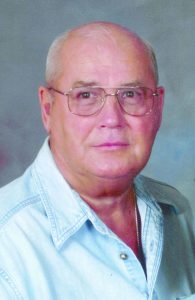 Rodney Erickson, 80, Hallock, Minn., and formerly of Greenbush, Minn., passed away at his home on Tuesday, March 16, 2021.
Rodney Clark Erickson was born in Greenbush on Jan. 25, 1941, the son of Lloyd and Goldie (Anderson) Erickson. He attended rural Haug and Haug Leo schools, rural Greenbush, through the eighth grade and graduated from Greenbush High School in 1959. Rodney served with the U.S. Army, mostly in Germany from 1959 until 1962 and attained the rank of SP4.
Rodney married Audrey Haurtson in 1962 and had three children, Brian, Brad and Brenda. Rodney drove truck while working in road construction for several years. He was manager of the American Legion Club in Greenbush, drove school bus for 19 years and finished his working years as a forklift operator at Polaris.
He was a member of First Presbyterian Church in Hallock and the American Legion and VFW clubs. Rodney married Sonja Clow of Hallock on Jan. 7, 2001, in Las Vegas, Nev. They enjoyed their winters for 18 years at their home in Apache Junction, Ariz. They traveled all over the U.S., Canada and visited Hawaii and Australia. They loved to attend dances and try out new restaurants.
Rodney enjoyed life to the fullest and had a smile for everyone even through adversity and pain. He worked hard all his life and his gardens and lawns were immaculate. Rodney made many friends and always had a good attitude, which served him throughout his life.
Family members include: his wife, Sonja; children, Brian (Joanne), Brad and Brenda; grandchildren, Holly and Matthew, stepdaughter, Tonia (Evan) Bohnen and step grandchildren, Alex and Grant; a sister Sandra (Harold) Beito; brothers, Floyd and Dean Erickson; a brother-in-law, Steve Stone; and nieces and nephews.
He was preceded in death by: his parents, Goldie and Lloyd; a brother, Gary; a sister, Shelly Stone; a sister-in-law, Arlene Erickson; and a nephew, Jason Erickson.
Memorial services were held Saturday, March 20, 2021, at 11 a.m. in First Presbyterian Church, Hallock. Interment will be in Bethel Cemetery, Greenbush. Visitation was held at the church for one hour prior to the service. Military honors will be accorded by the Greenbush American Legion Post #88. Rev. Marge Landwehr, presiding; Diane Younggren, organist. Austin Funeral Chapel, Hallock; austinfuneralchapel.com.