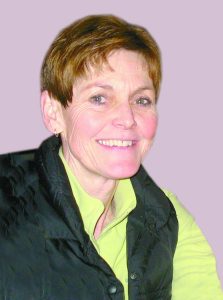 Bonita Lee Hanson, 68, of Hallock, Minn., died on Sunday, April 25, 2021, at Kittson Memorial Hospital, Hallock.
She was the first born to Marge and Lowell Hoven on Oct. 15, 1952, in Littlefork, Minn. Her sister, Marcel, followed three years later. Bonita’s father passed away in 1958 of cancer. Both Bonita and Marcel were adopted by Morris Larson after he married Marge in 1961, and then brought her brother, Lyle, into the world.
Bonita graduated high school from Littlefork Public School in 1970, Rainy River Community College in 1971, Moorhead State University in 1973 and received her master’s in elementary education from Bemidji State University in 1985. She worked in the Moorhead, Littlefork-Big Falls, Hallock, Kennedy and Kittson Central schools as a special education, physical education, health and study skills teacher. Bonita also coached track at Moorhead South Junior High, volleyball and basketball at Littlefork-Big Falls High School, along with many years of lifetime sports, track and volleyball in the Kittson Central school system.
It was in her years of teaching and coaching that she used her strong will to set high expectations for her students and athletes. She retired in 2013 after 32 years of teaching.
Bonita moved to Hallock in 1981 with her daughters, Tara and Shana, and met Kevin Hanson whom she married in 1983. They continued to live in Hallock but loved spending their summers in Detroit Lakes, Minn., and traveling to the Southwest U.S. each March to escape the cold, enjoy some golf and visit friends and family.
Bonita was active in her community as a member of Women of Today, Jaycees, local Education Association, Two River Golf Club, Hallock Curling Club and the City of Hallock Park Committee where she was instrumental in the planning and construction of the pool building. She was also a member of Grace Lutheran Church of Hallock.
Bonita is survived by: her husband, Kevin Hanson, Hallock; daughter, son-in-law and grandchildren: Shana, Jason, Breck and Reagan Wilson, Harwood, N.D.; sister and brother-in-law, Marcy and Swede Thunstrom, Mahtomedi, Minn.; brother and sister-in-law, Lyle and Mary Larson, Littlefork; brother-in-law and sister-in-law, Roland and Marla Hanson, Akron, Colo.; brother-in-law and sister-in-law, Scott and Dawn Hanson, Elbert, Colo.; along with nieces, nephews and their families, Hannah, Jace, Cass and Chesney Junker, Littlefork; Garrett Larson and Lauren Hovden, Thief River Falls, Minn.; Breann Larson and Rylan Henrickson, Hawley, Minn.; Peter Thunstrom, Mendota Heights, Minn.; Chris, Bonnie and Ben Rice, Grafton, N.D.; Tyler, Hannah, Kase, Trey and Haddie Hanson, Wray Colo.; Brandon Hanson and Nicole Evenson, Fargo, N.D.; Colton Hanson, Elbert.
Bonita supported her friends, family and community through her love of education, health, golf, travel and togetherness.
Bonita was preceded in death by: her mother, Margie Larson; mother-in-law and father-in-law, Rodney and Clarice Hanson; adopted father, Morris Larson; daughter, Tara Polkinghorne; along with many loving aunts and uncles.
Funeral services are scheduled for Saturday, May 8, 2021, at 11 a.m. in Grace Lutheran Church, Hallock. Interment will be in Greenwood Cemetery, Hallock. Visitation will be held at the church for one hour prior to the service on Saturday. Austin Funeral Chapel is in charge of arrangements. www.austinfuneralchapel.com.