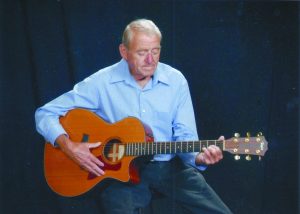 Ralph Kalinowski, 84, of Karlstad, Minn., passed away at his home on Tuesday, May 4, 2021.
Ralph Louis Kalinowski was born on Oct. 14, 1936, in Greenbush, Minn., to Frank and Verna (Johnson) Kalinowski.
He grew up west of Greenbush where he was very good at picking rocks for stone fences and herding cattle without shoes. He attended “country” school for first grade but even with his Uncle Tommy’s help he repeated first grade in town school. Ralph quit school early and went to work at the Kiene Farm as a cat skinner, was employed in Chicago at the Ford Motor plant and the railroad, then to North Dakota for area farms. He moved to Karlstad in 1969 with his family where he worked at Kapco, Arctic and Bogestad farms, ending his working years at Polaris. Ralph was a dedicated worker but he should have been a farmer, that was his true love.
Ralph and Sharon Rud were united in marriage at Blessed Sacrament Church in Greenbush on July 19, 1958, and were blessed with Tammy, Ron, Diane and Bob. While putting in many hours to provide for his family there was still time for camping, trips to Winnipeg, Bemidji, the Black Hills, softball, snocatting and teaching his sons the art of hunting and fishing.
Ralph truly enjoyed hunting and fishing, and was a marksman. If five deer were foolish enough to come out of the woods together, five deer went down. He spent many hours fishing for walleye. Even if they didn’t bite he would kick up a fuss when it was time to go in. He never saw a dandelion or a leaf that he didn’t go after with his trusty John Deere. He liked working in his garden and restoring his Allis. Ralph enjoyed playing his Taylor guitar and singing Hank, Merle and Charlie. He had been in a band when he was younger but according to him “they weren’t very good.” He was an excellent dancer. Sharon will miss her two-stepping partner. He vacationed with family at Disney World, Las Vegas, saw the pawn shop, San Diego with a side trip to Tijuana, a trip to Memphis and Nashville. Many weekends at the Warroad campground, houseboating in Ely, each summer at Leech Lake and the last four years making memories at the cabin on Island Lake.
Ralph is survived by: his wife, Sharon, of 62 years; their children, Tammy (Kim) Cole, Warroad, Ron Karlstad, Diane (Duck) Younggren, Hallock, and Bob, Karlstad; seven grandchildren, Justin (Nina) Cole, Elk River, Rick (Jamie) Cole, Thief River Falls, Stacy (Ryan) Bergstrom, Elk River, Kailey Younggren, Moorhead, Blair Younggren, Hallock, Kaleb (Thea) Kalinowski, Philadelphia, Madisyn (Jamison) Brekke, Devils Lake, N.D.; 11 great-grandchildren, Brett, Alexia, Mariano, Rosaria, Sarina Cole; Jory, Giselle and Raquela Cole; Treyvanne and Karabella Bergstrom, Jude Brekke, Baby Boy Kalinowski and Baby Brekke. Also his cats Butthead and Abner. His sister, Delores Taus; Brother-in-law, Merv (Georgia) Rud; Sisters-in-law, Janice Baker, Linda Odum; Brothers-in-law, Del (Jill) Rud and Wayne Zespy.
Ralph was preceded in death by: his parents; brother, Harry (Darlene, Addie); Brother-in-law, Leroy Taus; sister and brother-in-law, Lorraine and Rudy Wojiechowski; sisters, Alice, Barbara and Betty; and brother, Jonathon, in infancy; in-laws, Johnnie Rud, Nina Zespy, Tom and Nyla Gunstinson; and our beloved Herbie dog.
Memorials will be given to the Thief River Falls Humane Society in Ralph’s name.
Funeral services are scheduled for Tuesday, May 11, 2021, at 10 a.m. in St. Edward’s Catholic Church, Karlstad. Interment will be in the Huntley Cemetery, rural Strathcona, Minn. Fr. George Noel, presiding; Pat Larson, organist; Bob Kalinowski, Marlin Nelson, Leif Englund and Tommy Olson, special music. Honorary casket bearers will be Ralph’s grandchildren and great-grandchildren. Casket bearers will be JR Wojciechowski, Mike Wojciechowski, Marlin Nelson, Michael Vervelan, Corey Younggren, Kevin Kuznia, Leif Englund and David Pokrzywinski.
]Visitation was held at the church on Monday evening, May 10 from 6 to 8 p.m. with a prayer service at 7 p.m. Austin Funeral Home, Hallock. www.austin funeralchapel.com.