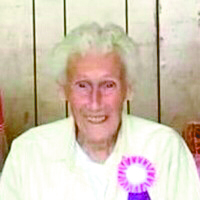 Rose Marie Crotty, 90, Pembina, N.D., passed away at Kittson Memorial Healthcare Center in Hallock on Wednesday, May 26, 2021.
Rose Marie Monette was born October 10, 1930 in Hallock, Minn., to Joseph and Rose Monette. She was baptized and confirmed in the Catholic faith and was a member of Assumption Catholic Church.
Rose grew up in Pembina and graduated from Pembina High School in 1951. She worked as an aid at Deaconess Hospital in Grand Forks and at the Ben Franklin store in Grafton. Rose was united in marriage to Dominic Jasper Crotty on Nov. 24, 1956.
Rose began working at Motor Coach Industries in 1973 and worked there until her retirement in 1994.
In retirement she helped at Green Thumb in Pembina and worked at Pembina School for 12 years. She was one of the two oldest members in the church parish and very excited at meeting the Bishop last year. She was a longtime American Legion Auxiliary member and was always a top Poppy seller.
Rose loved spending time with her grandchildren, collecting angels of all sorts, having dinner out and playing Bingo.
Rose is survived by her children, Robert, Grafton, Michael (Margaret), Grafton, Kathy (Jerry) Bosman, Grand Forks, Randy in Kuwait, Gary, Pembina and Michelle (Don) Schuler, Hallock; 10 grandchildren and four great grandchildren.
She was preceded in death by her parents; husband, Dominic; and a sister, Lucille Kantimere.
Funeral services will be held on Friday, June 4, 2021 at 10:30 a.m. in the Assumption of the Blessed Virgin Mary Catholic Church, Pembina. Interment will be held at a later date in the Pembina Cemetery. Visitation will be held at the church on Friday for one hour prior to the service. Fr. Robert Wapenski, presiding. Honorary pall bearers will be Rose’s grandchildren and great grandchildren.
Austin Funeral Chapel, Hallock, is in charge of arrangements. www.austinfuneralchapel.com.