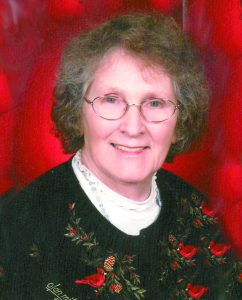 Harriet Pearson, 86, of Fosston, Minn., formerly of Red Lake Falls, Minn., passed away on Sunday, July 4, 2021, at Essentia Health in Fosston.
Harriet Hjeldness was born Aug. 4, 1934, at Kennedy, Minn., daughter of Arthur and Nellie (Peppard) Hjeldness. She was raised and attended school at Kennedy, graduating in 1952. She worked in the Kennedy area.
On Sept. 4, 1954, Harriet was united in marriage to Keith Pearson at Maria Lutheran Church in Kennedy. The couple built a home on the family farm and to this union three children were born: Randall Keith, Gwen Danelle and Todd Mitchell. Later they moved to Red Lake Falls, where they continued to live until Keith passed away in December of 2014. In 2006, Harriet was stricken with encephalitis, which though changed her life, she maintained a great memory for the past, kept her sense of humor and always had time to play rummy, “deuces are wild.” Following Keith’s passing, Harriet moved to Fosston to be closer to family.
Harriet was an active member of Bethany Lutheran Church, Red Hats, American Legion Auxiliary and was always willing to lend a helping hand. She was a wonderful bread baker and she and Keith loved to make lefse. She had numerous jobs in the area including the Tastee Freeze, Thompson Hardware and was employed by Red Lake County in the Social Services for many years.
Harriet is survived by: her children, Randall (Heather) Pearson of Rochester, Minn., Gwen Schroeder of Hugo, Colo., and Todd (Nancy) Pearson of Fosston; grandchildren, Kimberly Schroeder, Nicholas Pearson, Kristin Pearson, Margaret Pearson, Leif Pearson and Reid Pearson; great-grandchildren, Merik J. Young, Jazlyn Young, Cadence Long and Soren Pearson; along with many nieces and nephews.
She is preceded in death by: her husband, Keith on Dec. 10, 2014; parents, Arthur and Nellie; brothers, Howard (Vivian) and Curtis; son-in-law, Rod Schroeder.
Funeral service was held on Thursday, July 8, 202, at 10:30 a.m. in Bethany Lutheran Church in Red Lake Falls, with the Rev. Gary Graff officiating. Burial was held at Union Liberty Cemetery near Hallock, Minn. Visitation was held one hour prior to the service at Bethany Lutheran Church.