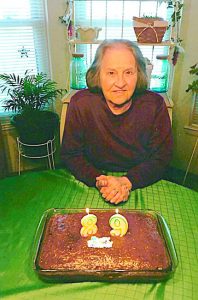 Marie Quirk, age 93, passed away peacefully on Sept. 24, 2021.
Marie, who was a longtime resident of Clinton Township, Mich., was originally from Lancaster, Minn. Growing up on a farm, she learned early the value of hard work and independence. She was the only one in her family to move away and forge a way of her own.
She made her way to Detroit, Mich., where she met her husband, Robert. Both of them worked at Federal Mogul Manufac-turing for 25 years. They eventually married and continued their life together, starting a family, having one daughter, Sharon.
Marie loved taking care of her family and particularly loved the joys of being a grandma. She took on an essential role in helping her daughter raise her two grandsons. She was a great cook and baker, and loved hosting holiday celebrations at her home for her family. Marie also held a special place in her heart for veterans and supported several organizations over the years.
Visitation was held on Thursday, Sept. 30, 2021, from 11 a.m. to 1 p.m. at Resurrection Funeral Home Clinton Township, Mich., with a funeral service at 1 p.m. Final resting place is in Resurrection Cemetery, Clinton Township.
Condolences and memories may be shared with the family at www.resurrectionfuneralhome.com
She is survived by: daughter, Sharon (Dominic LaMarra) Quinn; grandchildren, Daniel and Ryan (Natalie) Quinn; great-grandchildren, Alaina and Landon; sister-in-law, Geraine Maksmychuk, West, Fargo, N.D.
Marie was preceded in death by: her husband of 62 years, Robert Quirk in December 2015; brothers and sister-in-law, Bill and Shirley Maksmychuk, Robert (Allen) Maksmychuk; sisters and brothers-in-law, Jenny and Phillip Pearson, and Dorothy and Scott Sveum.