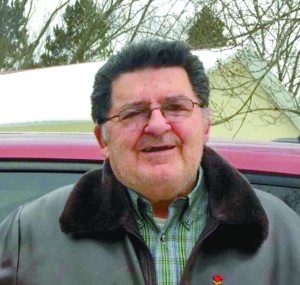 Willard Joseph Landreville, age 83, of Milaca, Minn., passed away peacefully in his sleep the morning of Saturday, Oct. 16, 2021.
He was an amazing husband, father, grandfather, uncle and brother-in-law. He will be missed tremendously by all who knew him. Our hearts will never be the same.
Willard was born on Sept. 4, 1938, to Arthur and Lucille (Laurin) Landreville in Argyle, Minn. Willard attended Catholic school through sixth grade in Argyle and graduated from Argyle High School in 1956. Throughout his life, you could find Willard wearing argyle socks as a tribute to his hometown roots.
Following graduation, he served in the Army during peacetime in Japan. He met Janice Carlson while in high school and they married on Oct. 21, 1961.
Willard worked for Midwestern Gas Transmission Company, which brought his family to Osceola, Wis., Hallock, Minn., and finally settling in Milaca in 1979. Willard worked 39 years for one company – just one of the many examples of his faithfulness and commitment of doing a job right. After retiring, Willard volunteered his time as a driver for Timber Trails for over 15 years driving patients to appointments all over the state.
Willard’s Catholic faith was a driving force in how he lived his life. He was an active member of St. Mary’s Catholic Church and the Knights of Columbus. Anyone who knew Willard, knew he was a prayer warrior. People near and far called upon Willard to pray for them and their needs, and Willard was happy to do it. Willard loved all his sons-in-law and daughters-in-law like his very own. Willard never judged anyone and forgave everyone. Although he faced many health challenges and his body failed him, he never complained.
Willard loved his family deeply and his grandchildren lovingly called him Boompa. You could find Willard driving through town with his personalized Boompa plates or driving his golf cart. His grandchildren are devastated to lose their beloved Boompa who was always there for them. He sponsored them for confirmation. He showed up for races, Grandparent’s Day and anything he was asked to do. His faith living on in all of us will be his biggest legacy. We love him and will miss him every day.
He is survived by: his wife of 60 years, Janice, Milaca; children, Sonya (Henry) Mingo, Alexandria, Minn., Shari (Kari) Landreville-Sweesy, Monroe, Wash., Stacy (Perry) Ludwig, Wayzata, Minn., Sheila (Don) Pake, Greensburg, Ind., Sally (Wayne) Nelson, Milaca, and Wade Landreville, West Bend, Wis.; grandchildren: Tyson Mingo, Sophie Ludwig, Shelby and Shannon Pake, Max Nelson, Ellie and August Landreville; sister, Geraldine Lindemoen, Newfolden, Minn., and brother, Roger (Marilyn) Landreville, Prior Lake, Minn.; and several nieces and nephews.
He was preceded in death by: his parents; brother, Dale Landreville; and sister, Betty Trickel.
Visitation will be held on Tuesday, Oct. 19, 2021, from 4 to 7 p.m. at St. Mary’s Catholic Church, Milaca. A mass of Christian burial will be held on Wednesday, Oct. 20, 2021, at 11 a.m. at St. Mary’s Catholic Church. Memorials preferred to American Heart Association or St. Mary’s Catholic Church of Milaca.
Arrangements by Peterson-Johnson Funeral Home, Milaca.