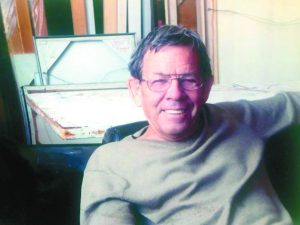 Daniel Langehaug, 77, of Lake Bronson, Minn., died unexpectedly on Nov. 3, 2021.
Daniel was born in 1944, in Hinkley, Minn., to Martin and Amy (Danielson) Langehaug.
He joined the U.S. Army in 1962 and was stationed at Mount Tamalpais in California. Following his time in the service, he moved to Illinois to complete his bachelor’s degree in English.
In 1973, Daniel moved to Lake Bronson, initially helping his uncle on the farm. In 1983, he married Patricia Jauhola.
He will be missed for his quick wit, engaging conversations and penny-pinching abilities. He was known for his compassion for others, as he took on the role of caretaker for many relatives throughout the years. In addition to caring for family, he served his community on the Zion Lutheran Church Board, the Kittson County Museum Board, the Tri-County School Board and the Riverside Cemetery Board.
Daniel loved spending time with his family, visiting his daughter in Minneapolis, working with his son on the farm and fishing with his grandsons.
He is survived by: his wife, Patty; his daughter, Danielle; his son, Mark, and daughter-in-law, Chelsi; three grandsons, Luke, Eli and Weston; and his special nephew, Jacob Wermers; niece, Anna Jauhola; and nephews, Andy and John Jauhola; and many cousins and friends.
He was preceded in death by: his parents; brother, Lowell; mother- and father-in-law, Ruby and Ray Benson; brother-in-law, Larry Jauhola; many aunts and uncles.
Funeral services are scheduled for Wednesday, Nov. 10, 2021, at 1 p.m. in Zion Lutheran Church, Lake Bronson. Interment will be in Riverside Cemetery, Lake Bronson. Visitation will be held at the church for one hour prior to the service.
Kathy Levenhagen and Rev. Gary Halverson, presiding. Corienne Jacobson, organist, and Savannah Bernstrom, soloist. Military honors will be accorded by the Halma-Lake Bronson American Legion and the Minnesota National Guard. Honorary pallbearers are his grandsons, Luke, Eli and Weston.
The family requests masks to be worn at the service. Donations can be made to the Kittson County Historical Museum in Lake Bronson.
Austin Funeral Chapel, Hallock, is in charge of the arrangements. www. austinfuneralchapel.com.